US researchers have succeeded in making the most realistic synthetic collagen to date. Tissue engineers, who strive to create tissues in the laboratory as ’replacement parts’, require collagen or a substitute as scaffolding to support growing cells.

Currently, collagen derived from animals such as cows is often used as a tissue scaffold, but this brings the risk of contamination by bacteria or viruses and can trigger unwanted immune responses when the engineered tissue is transplanted. And synthetic substitutes such as polylactic acid do not possess the biological subtleties of natural collagen.

Now, a team led by Jeffrey Hartgerink at Rice University in Texas have tailored chains of amino acids so that they assemble themselves first into nanoscale fibrils, then entangle into larger fibres which in turn trap water to form a hydrogel - which mirrors the sequence of self-organisation undertaken by natural collagen. 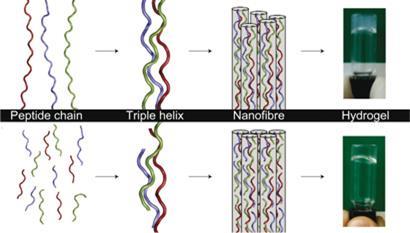 Collagen is unusual because it is a fibrous protein made of chains of around 1000 amino acids. Three chains come together to form a triple helix, and in turn these long threads coalesce to form fibrous bundles.

Hartgerink’s team sought to mimic this hierarchical self assembly. The researchers constructed chains of amino acids that would spontaneously form triple helices and, crucially, had electrostatically ’sticky’ ends. ’We designed positive and negative charges into the different ends,’ Hartgerink explains. ’So the peptides assemble into sticky-ended triple helices and these then polymerise into much longer structures.’

These longer fibrils then entangle with each other - in ways that are not totally understood - to form bundles which can trap water to create a hydrogel. When exposed to the enzyme collagenase, the synthetic product is degraded at a rate similar to natural collagen. This is important as the scaffold in a transplanted tissue needs to be replaced by the body’s own tissues.

Sheila MacNeil, a tissue engineer at the University of Sheffield in the UK, says: ’At least a decade of attempts to understand collagen chemistry and synthesise collagen has yielded steady progress but the challenges of how these collagen peptides pack into fibrils and then organise into collagen fibres is not easy. Making designer collagens is not a new concept but this innovative research has taken the approach of swapping around some of the amino acid residues to give a sequence more likely to promote tight hydrogen bonding between amino acids than previously obtained.’

MacNeil concludes that the new work ’represents a significant advance in the challenge to make an entirely synthetic collagen for clinical use which avoids the use of animal derived collagens’.