Taking the measure of atomic friction

How much force does it take to move an atom? Until now, that question has been impossible to answer because no instrument could measure the tiny forces involved.

Scientists in the US and Germany have successfully used an atomic force microscope to determine exactly how much effort is needed to drag a single atom of cobalt across the surface of different metals.

The key to the groundbreaking work, carried out by Markus Ternes and colleagues from IBM’s Almaden Research Center in California and the University of Regensburg in Germany, was to use a particularly sensitive atomic force microscope (AFM), equipped with a qPlus sensor. An AFM works by scanning a surface with a tiny vibrating cantilever - similar to a miniature diving board - that has a sharp tip. 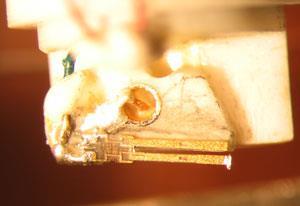 The miniature ’tuning fork’ inside the AFM. Approximate size of the view is 1.7cm x 2.5cm.

When the tip approaches the surface it is deflected by surface forces, and the resulting change in frequency can be measured. Ordinarily, however, the amplitude of the cantilever’s vibration is of the scale of tens of nanometers, which makes very fine manipulation of atoms tricky - the tip is effectively bouncing up and down massively compared with the size of the atom. 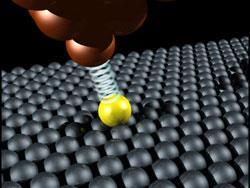 However, the new qPlus sensor uses a much more rigid quartz cantilever, similar to a tiny tuning fork, which vibrates at an amplitude of picometers. This means that it remains in constant touch with the surface and can measure the forces required to move single atoms with exquisite precision.

The research team placed a single atom of cobalt on a platinum surface and swept the tip of the AFM across the surface, moving it gradually nearer to the atom until it was close enough to flip the atom from one hollow on the surface to the next. According to the team’s measurements, the force needed to do this was 210 piconewtons.

’We then repeated the experiment using cobalt on a copper surface, and found that this was about 10 times easier to move, as we had expected,’ Terne told Chemistry World. The technique could be useful in nanotechnology, where it is important to know how stable an atom is on a surface before building structures on it.

The measured energy landscape when dragging a cobalt atom (left) and a carbon monoxide molecule (right) over a copper surface. The arrows show the forces that are acting on the AFM tip as it manipulates the molecules

Werner Hofer, a surface scientist at the University of Liverpool in the UK said, ’From the surface science point of view you cannot measure much more than the force needed to move an atom. We can now think about full control of chemical reactions, watching what happens when two molecules are pushed together to react to make another molecule.’