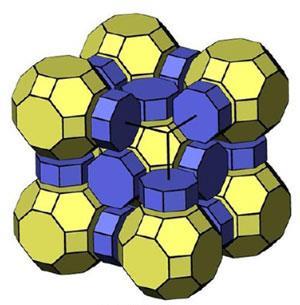 Tiling of the RHO zeolite framework

A new simulation model for assembling zeolites from simple building blocks can be used to predict the structure and feasibility of existing zeolite frameworks. The model may explain why only a fraction of the millions of hypothetical zeolites actually exist and could help to predict new frameworks for future synthesis.

Zeolites are widely used as catalysts and molecular sieves thanks to their regular microporous structure. Most zeolites are made up of tetrahedrally coordinated ‘T’ atoms – usually silicon or aluminium – bridged by oxygen atoms. It is the way in which all the TO2 are assembled in a framework that gives each zeolite its specific properties. The number of different frameworks modelled reaches into the millions. The big question is why only about 200 of these zeolites have actually been synthesised so far, with even fewer existing in nature?

Vladislav Blatov, at the Samara State University, Russia, and colleagues have proposed a new model of assembling zeolite-type frameworks to tackle this conundrum. Of the 2000 hypothetical zeolites they have tested so far, their new model correctly predicts 189 of the synthetically viable zeolites. ‘Our approach can essentially restrict the search for new zeolites from the millions of hypothetical and, suggesting possible frameworks, can inspire new syntheses,’ he explains.

Key to their simulation was breaking the framework down into its smallest possible building blocks, natural building units (NBUs), and then figuring out how these were put together under strict rules. ‘We used a novel algorithm to subdivide the zeolite framework into polyhedral units, this is the so-called natural tiling approach,’ he continues.

While subdividing the zeolite framework into polyhedral building units has a long history, their NBUs are unique because they correspond to real cavities and cages. All of their frameworks were then assembled by gluing together one or more NBU faces through a polycondensation reaction. In this way, T–O–T bridges were formed with no common T atoms between units. They found that most of the known zeolites can be split according to this condition. If not, then the structure is inherently unfeasible. ‘These criteria are not thermodynamical (all hypothetical zeolites are energetically stable) but kinetic,’ adds Blatov. ‘Many hypothetical zeolite frameworks do not occur not because they are unstable but because they cannot be assembled from packing units.’

The team now plan to study all the known hypothetical zeolites and rank them according to the likelihood of their existence. Stefan Bromley, at ICREA, Spain says that this would be a true test of the model in tackling the zeolite conundrum, especially given that the proportion of feasible frameworks is already very high from their small initial set of hypothetical zeolites. ‘With more directed searching of the millions of recorded hypothetical structures, the number of viable hypothetical zeolites will still massively outweigh those currently known,’ he says. Bromley adds that the work may open the door to a range of new research in structure prediction and could be extended to other more complex cations and even non-silicate frameworks.

But Mike Treacy of Arizona State University, US, thinks that there are still missing pieces to the puzzle and the flexibility of the final structure needs to be considered to create a more complete picture. ‘The correlation between NBUs and feasibility is undoubtedly real, but is not perfect,’ he says. ‘It seems likely that the natural building units resembling polyhedral are inherently flexible, and can be linked to each other in ways that preserve the overall flexibility.’

Indeed, compiling all independent pieces of information to complete the mosaic of the crystal growth phenomenon is something Blatov is keen to undertake. Blatov add that this topological method of analyzing zeolite frameworks could provide a ‘bridge between experimental results and theoretical models’.