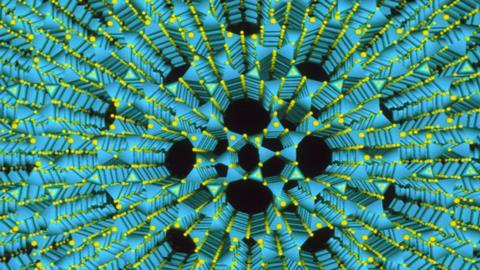 Thanks to their porous nature, zeolites are widely used as catalysts. However, the enormous – in principle infinite – number of possible zeolites makes finding and producing the best zeolite to catalyse a particular reaction difficult. But researchers in Spain have developed a systematic technique, demonstrating its efficacy by selecting superior catalysts for common industrial reactions.

Zeolites – porous hydrated aluminosilicate minerals – catalyse chemical reactions by stabilising the transition state through interactions with the pore walls, thereby lowering the activation energy. A zeolite is therefore most effective as a catalyst if it can bind tightly to a reaction’s transition state. In search of a method to find the best zeolites, Avelino Corma of the Polytechnic University of Valencia was inspired by a method in which mimics of a similar shape are used to produce voids in materials such as amorphous silica. This has achieved limited success in amorphous materials because heating the material to remove the mimic inevitably introduces defects. ‘I thought I could use this concept to make a crystalline material, and would preserve all the interactions that occur with a mimic because the structure would remain as it was,’ explains Corma.

Synthetic zeolites are generally produced by hydrothermal crystallisation of silica–alumina gel. To extend the range of zeolite structures, various ‘organic structure directing agents’ (OSDAs) can be added to the gel. Corma and colleagues used molecules whose shapes, sizes and charge distributions were as close as possible to the desired reactions’ transition states. First, they studied the disproportionation of toluene to produce xylenes, deciding on the phosphonium cation as an OSDA. The resulting zeolite, ITQ-27, had been synthesised before but it seems that it has never been tested as a catalyst for this reaction. Tests found it was more active than either mordenite or ZSM-5 – two catalysts used industrially for this reaction.

The researchers used similar techniques to develop superior zeolite catalysts for two other industrially important reactions: the isomerisation of ethylbenzene into xylenes and the synthesis of adamantane, used in pharmaceuticals and polymers. Corma says that, in theory, it should be possible to produce the most appropriate zeolite to catalyse any reaction. ‘There may be some limitation in achieving the mimic of the transition state and making it in such a way that it can catalyse production of a zeolite,’ he cautions. ‘If you could do that, I don’t see any limitation.’

Mike Treacy of Arizona State University, US, is impressed by the catalysts’ selectivity for the desired reactions. ‘In a sense, the researchers are treating the catalyst as an “entropic filter” – a support material that inhibits undesirable pathways by giving only the desired reaction pathway room to proceed,’ he says. ‘I think there is some merit to this idea.’