The future of PVC production? 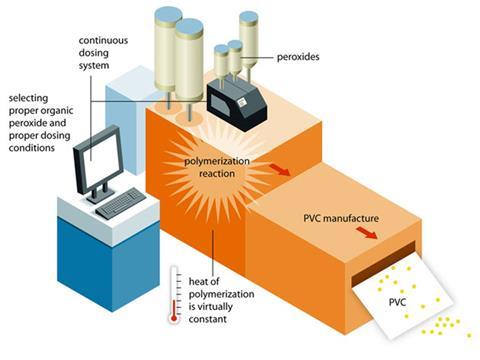 Fashion, pop music, the internet – some things are always changing. PVC production is not one of those things. In fact, the way in which we produce PVC, one of our most enduring plastics, is scarcely different today compared with 50 years ago.

But there are signs that a new spin on the established approach is gaining traction.

AkzoNobel launched its continuous initiator dosing (CID) technology in 2007. The technology was designed to improve safety, quality and output, and since then the company has struck five licensing deals in Europe, covering Spain, Russia and Germany. Now, it has sold its first licence outside Europe: the system is to be installed in three Mexichem plants, and the deal is significant enough to prompt AkzoNobel to invest EUR9 million (£7 million) to increase capacity at its site in Los Reyes, Mexico, which makes organic peroxide for PVC production.

According to AkzoNobel, the industry produces about 34 million tonnes of PVC each year, making it the third most widely produced plastic in the world. Furthermore, demand is growing fast – analysts predict it will hit 49 million tonnes by 2017, driven by consumption in the developing world.

The chemical industry is highly conservative and the plastics industry is arguably one of the most conservative parts of it. Production requires huge capital investment in highly specialised equipment that can be difficult to repurpose or retrofit. Moreover, profits are sensitive to vanishingly small changes in running costs – percentage point increases or decreases in energy consumption or raw material prices might mean the difference between profit and loss.

This hampers uptake of innovation but it is only part of the story. PVC production has inherent problems. The polymer is insoluble in its monomer, which means it precipitates as it forms, explains Brian Brooks, a PVC expert at Loughborough University, UK. Also, the reaction is highly exothermic.

Traditionally, the answer to these problems has been suspension polymerisation, the process by which most PVC is made. The reaction is started by an initiator compound that turns monomer molecules into free radicals. Each of these radicals adds further monomer units to become a rapidly growing chain. The initiator is evenly distributed through a water phase into which tiny droplets of the monomer are dispersed. The initiator molecules migrate to the droplets, which become tiny production plants, ejecting the insoluble polymer grain as it gets bigger. Meanwhile, the high surface area to volume ratio of the droplets helps to control the temperature, although the reaction still has to be cooled to prevent thermal runaway – a significant safety concern.

With everything set up at the start, the only way to control the reaction once it’s running is to cool it. This cooling introduces the basic inefficiency: you have to have enough cooling to accommodate the peak of heat production, plus a little extra for safety.

In the AkzoNobel process, the initiator is added gradually at a variable rate that keeps the temperature constant. ‘The idea with continuous dosing is not to control the reaction with the cooling but to control the reaction instead with the rate of addition of the initiator,’ says Barry Cottrell, business manager at AkzoNobel. ‘In our technology the initiator goes in at a rate that is determined by what’s going on in the reactor. There’s a feedback loop going on with the temperature and pressure of the reactor controlling the rate of feed of the initiator.’ This allows you to run the polymerisation much quicker – 20–30% quicker in some cases. It also makes the whole process safer because the reaction can be stopped quickly by simply stopping the flow.

‘You need an initiator with an extremely short half life,’ says Cottrell. ‘If you put initiator that lingers in, you lose control.’ This is where AkzoNobel – a company that does not make PVC – comes in. It has developed an initiator that decomposes very rapidly: diisobutyryl peroxide.

In theory, the approach could applied to all PVC production, says Cottrell. The molecular weight distribution – the key attribute for PVC – is set by the temperature at which you run the reaction and the same initiator can be used across the whole temperature range.

But whether everyone will want to switch remains to be seen. In some markets, the desire for more capacity may be fairly low. Right now, the approach suits producers of high grade PVC, Cottrell says. With traditional suspension polymerisation, producers typically end up with a small amount of unspent initiator at the end of the reaction that can degrade the finished polymer. CID reduces leftover initiator because dosing is controlled throughout the process.

Furthermore, the degradation generates colour in the material by creating unsaturated bonds in the polymer chains. Therefore, CID improves the whiteness of the PVC and reduces the need for whitening additives, such as titanium dioxide – the price of which has rocketed in recent years.

‘Continuous initiator dosing is not new in itself,’ says Brooks. ‘It’s been used for other monomers. And it has in fact been tried before with PVC. But with any complicated process you can imagine that you want to tweak one variable. What these people seem to have done is tweak two or three variables at the same time and get the combination right.’