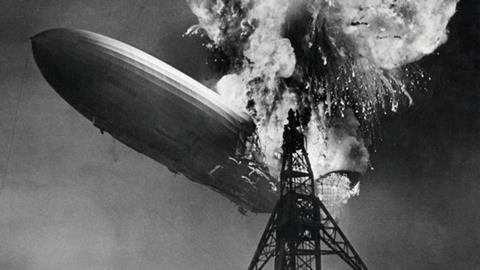 The legacy of the Hindenburg disaster

Eighty years on, the airship fire still leaves its mark on the hydrogen industry

It has been 80 years since the event that changed aviation history. On 6th May 1937, following a three-hour attempt to land in changeable winds at Naval Air Station Lakehurst, US, the airship Hindenburg burst into flames, killing 36 people. The events that led to this moment have been the subject of debate ever since – and have left a shadow hanging over both the airship and hydrogen industry.

Why is the Hindenburg remembered?

The Hindenburg was a semi-rigid airship built by the Zeppelin Company. It was marketed as a luxury cruise liner of the sky, and flew with the aid of 16 large cotton cells containing hydrogen, a gas that is lighter than air but highly flammable. Zeppelins had been flying using hydrogen since 1900, and, at the time, it was believed that precautions had been taken to make sure the craft was as safe as possible.

Airships were still a relatively new mode of transport, and there had been other disasters before the Hindenburg. In 1929, the crash of the British R101, the ‘world’s largest flying craft’, caused 48 fatalities and effectively ended the British airship programme. A year earlier, 52 people had died in an explosion aboard the French Dixmude. Both airships had used hydrogen. However, the worst airship disaster in history did not involve hydrogen at all: the airborne aircraft carrier USS Akron, which crashed in 1933 killing 73 of the 76 people on board, was filled with helium.

The major difference between previous events and the Hindenburg was presence of newsreel cameras. Images of the tragedy, which saw the 245m-long airship burn up in 34 seconds, were broadcast around the world by organisations like Pathé, along with eye witness commentary by terrified journalist Herbert Morrison (whose words ‘Oh, the humanity!’ are remembered today). The newsreels made a huge impression on those who saw them – and still do. No international passenger flights took off after the Hindenburg disaster: the airship era ended overnight.

What happened with the Hindenburg?

We will never know definitively. Accident investigation today is a well-documented and structured procedure. A team of experts from various fields will analyse every aspect of evidence and failure mechanisms to identify possible and root causes – and won’t stop at the physical or chemical cause. In 1937, air-crash investigation was still in its infancy. Both the US and German governments performed investigations but the Hindenburg was a large and complex piece of machinery with multiple systems and doubts about the original investigations have fuelled the event’s notoriety.

Chemistry plays an important role in modern incident investigation. Materials analysis is used to understand the behaviour of materials that made, or were carried on, the aircraft and to find points of design deviation, while experimental and computer modelling is performed to understand any fire phenomena. Very few of the modern analysis techniques we use today were available in 1937, and even with these techniques analysis can be difficult. In catastrophic disasters, much of the physical evidence is destroyed making full analysis difficult. Fire is also incredibly complex – even in a controlled laboratory, the same conditions replicated 1000 times might only result in one or two ignitions, such is the fine balance of factors.

Investigators at the time identified the cause of the disaster as an electrostatic discharge from the balloon. This was supported by stormy weather in the area (charged atmospheric conditions) and eye-witnesses reporting ‘St Elmo’s fire’ on the balloon (luminous plasma that appears on electrically charged surfaces). Hydrogen was identified as the fuel, as witnesses reported seeing a balloon leaking and hydrogen burns at a wider range of concentrations than hydrocarbons and requires less energy to ignite.

Is that the only theory?

Other possible reasons the fire spread so quickly have been proposed. One idea that persisted until very recently1 was that the balloon skin had been highly flammable.2 Scientists identified varnish (sealing the balloon), containing aluminium metal powder (used in rocket fuel) and/or nitrocellulose (gun cotton), as a possible accelerant. They also suggested the presence of aluminium powder and iron oxide presented the opportunity for a thermite redox reaction. All of these theories have since been investigated in laboratories3 and found unlikely given the exact chemical make-up of the balloon skin.

The consensus among experts today is that the original conclusion was correct. Some form of electrostatic discharge (either brush or corona) was responsible for the ignition, and that hydrogen played the major part in the rapid spread of the fire.

How did the Hindenburg affect the hydrogen industry?

Hydrogen has many advantages as a fuel. It is ‘cleaner’ than hydrocarbon fuels, burns easily, and is safely managed in difficult environments. However, today it is almost impossible to discuss hydrogen use in any context, let alone aeronautics, without the ‘Hindenburg effect’ surfacing: people remember the speed and size of the fire and decide to avoid the use of hydrogen altogether. The visibility of the Hindenburg disaster dramatically changed people’s perceptions, much like other catastrophic disasters are so often the catalyst for change.

Is our view of hydrogen changing?

In the 21st century things may be coming full circle. The hydrogen economy is growing daily with its use in public transport, power (such as in nuclear plants) and research programmes. There is a great body of information on the safe use of hydrogen, and organisations like the UK Health & Safety Executive and the US Chemical Safety Board advise on its safe use. There are also systems and forensic techniques in place to learn as fully and as quickly as possible from every error that endangers people.

The airship industry is also seeing resurgence. Today, the same hanger that once housed the Great British airships of the past now houses the massive hybrid dirigible Airlander 10, the largest aircraft in the world (though the manufacturers opted for helium, rather than hydrogen, as the buoyant gas).

We cannot say that there will never be another airship, or hydrogen, disaster; but we can feel safer in the knowledge that we live in a very different world to that of the Hindenburg.

Claire BensonClaire Benson is a research fellow of the Explosions and Fire Research Group at London South Bank University, UK