The promise of algae

Why interest in algal biofuels is blooming

In October this year, the UK’s Carbon Trust launched a new ?30 million algal

biofuels initiative, beginning by offering up to ?500,000 of funding for each of 12 research strands investigating fundamental R&D challenges in the area. Should these prove successful, the organisation hopes to begin a second phase to support large scale production of algal oil.

Algae’s allure as a source of transport fuel is clear, in principle. Algae are single-celled photosynthetic organisms that, like plants, use the sun’s energy to convert CO2 and water into carbohydrates, such as sugars and starches, which can be extracted and processed into hydrocarbon fuels. So just like food crops and woody biomass, algae can be a home-grown source of energy, allaying fears over energy security. And the technology could also be sustainable and carbon neutral, avoiding the use of scarce fossil fuels and cutting down on greenhouse gas emissions - which is not the case for most current ways of producing fuels from food crops. 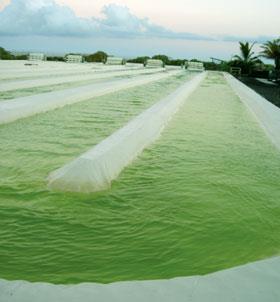 Shell and HR Biopetroleum surf the wave of expectation with their seawater algae ponds in Kona, Hawaii

But algae’s key attraction is that the organisms can be grown in sites as diverse as wastelands or deserts, so long as they are close to a water supply and preferably a rich source of carbon dioxide. In stark contrast, plant-derived biofuels take up valuable land that could be used to grow food crops. What’s more, according to the Carbon Trust, algae can also produce between 6 and 10 times more energy per hectare than conventional crop-based biofuels.

The Carbon Trust is not the only organisation intrigued by algae’s potential. Fuel security fears have led to the US Defence Advanced Research Projects Agency (Darpa) making funding available to research projects aimed at replacing petroleum-based military jet fuel with a biological alternative that could be grown within US territory.

The aviation industry, in particular, needs high density fuel sources that pack in far more energy per kilogram than the batteries or fuel cells which may replace liquid fuels in cars. According to estimates from US-aircraft manufacturer Boeing, algae ponds the size of Maryland, US, (3.4 million hectares) would be able to supply the world’s entire aviation fuel needs, some 85 billion gallons.

And other private companies large and small have been checking out the area for many years. Indeed, as early as 1978 the US government initiated an Aquatic Species programme led by the Department of Energy to investigate the possibility of producing liquid fuels from algae. The prospect of feeding the organisms on the flue gases from a power station seemed especially attractive.

Chemistry not the problem

Last century’s problem with algae, as Bill Clinton’s administration discovered when they discontinued US exploration in 1996, was that using it to produce biodiesel cost too much. The technology would only have been cost-effective, according to the final close-out report of the Aquatic Species programme, if oil prices rose to twice the $20 a barrel they hit a decade ago.

"With algae, the downstream oil to fuel conversion processes are coming along nicely - the challenges lie in the growth, harvesting and oil extraction" - Al Darzins, US National Renewable Energy Laboratory

Nowadays, oil prices have jumped well above those levels, even accounting for the recent dip.

The challenge today, says Ben Graziano of the Carbon Trust, are that there are still many fundamental technological questions to be solved - including where to grow the algae, which strains to choose, how to boost productivity, and how to design the most cost effective culture ponds.

The chemistry of converting algal oil products to fuels is not a problem, at least. ’The high efficiency of chemical conversion processes is helping to drive the interest in biofuels,’ says Al Darzins, principal group manager of the US National Renewable Energy Laboratory (NREL), where he leads an algae research project. Oils extracted from algae are converted into biodiesel in much the same way as soybean or rapeseed oil: triglycerides are treated with base and then methanol to form the fatty acid ester biodiesel, and glycerol as a by-product. Alternatively, oils can be saturated with hydrogen to drive off oxygen and form petrol-like alkenes. 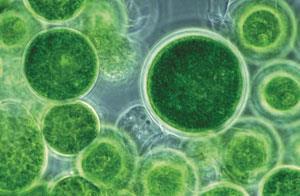 ’With algae, the downstream oil to fuel conversion processes are coming along nicely - the challenges lie in the growth, harvesting and oil extraction,’ adds Darzins.

Sorting out the house

Designing the ponds or bioreactors that the algae grow in is a key challenge in increasing productivity, says Stephen Skill, who works on algae at the Plymouth Marine Laboratory, UK. Growing algae in photobioreactors, the industrial equivalent of a test tube, offers protection to the algae and enables full environmental control. But they are costly to build and not particularly suitable for large scale production of low-price oil.

Instead, the Carbon Trust is interested in growing algae in open ponds about 12 inches deep, which would provide a far cheaper, if less effective, method of producing the algae in bulk.

While there are engineering challenges to be solved to ensure a simple harvesting and oil extraction method, Skill adds that one of the main challenges with cultivating algae is boosting productivity while keeping a sensitive culture robust and stable.

With more than 30,000 known species of algae, finding the most suitable strain is not an easy task. There will not be just one ’magic strain’, points out Skill - a different species is likely to be needed for every location to ensure that a consistent amount of oil is produced all year round, despite fluctuations in temperature and sunlight. As each species of algae has evolved to excel in a specific location, the most suitable strains are most likely to be found close to proposed algae cultivation sites.

Investing in a greener future

There has been a rash of investment by oil giants such as Shell and Chevron Philips, as well as a plethora of small start-ups over the last few years, all trying to make biofuels from algae.

"We’re still at the very start of this race and we’ve maybe covered the first metre of the 100 metre track. The challenge now is to get this technology out of the proof of concept stage" - Ben Graziano, Carbon Trust

Through a collaboration with Hawaiian firm HR Biopetroleum, Shell is developing a two and a half hectare site on the Hawaiian island of Kona to demonstrate the commercial and technical viability of using seawater ponds to grow algae for biofuel production.

Dozens of other companies are also taking early steps in the algae biofuels production line, and while many claim to be making oil, they are not yet churning out enough to make any dent in our need for fossil fuels.

US-based Sapphire Energy is working toward producing Green Crude, a clean, synthetic fossil fuel replacement on a large commercial scale. The company is tight-lipped about its technology but claims its processes require ’no farmland, no crops, no fertiliser and no excessive water use’.

US-based GreenFuel Technologies is sticking with the photobioreactor approach to growing algae and has recently announced that it is entering the second phase of its joint project with Spanish firm Aurantia to demonstrate how industrial CO2 emissions can be economically recycled to grow algae. While the project at the Holcim cement plant near Jerez, Spain, could eventually scale to 100 hectares, the high value goods that will be harvested alongside the algae’s oil will no doubt help to subsidise the costs.

Israeli firm Seambiotic also stresses the idea of reducing the impact of coal-fired generators, and is using flue gases rich in CO2 to feed algae and create biofuels. However, while initial results are encouraging, the open algae beds do not sequester all the CO2 emissions from a power plant, the company says, and it is still investigating ways to improve the capture system.

’We’re still at the very start of this race and we’ve maybe covered the first metre of the 100 metre track,’ sums up Graziano. ’The challenge now is to get this technology out of the proof of concept stage.’