Thermal imaging on the wing

Butterfly wings are a well known example of structural colour, with the nanostructured chitin refracting and reflecting light in such a way as to give them the iridescent colour that makes them so beautiful. Now, by adding carbon nanotubes to butterfly wings chemists have been able to turn these nanostructures into an infrared (IR) detector. 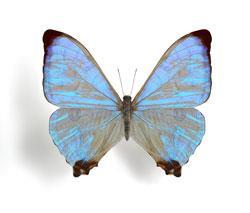 At the moment, thermal infrared imaging to see in the dark or check for poor insulation requires a complex piece of kit, including a microbolometer which converts heat into a change in resistance. That’s then connected up to give an optical readout on a screen or in night vision goggles. The suggestion made by Radislav Potyrailo’s team at General Electric Global Research Centre in New York, US, is that the iridescent scales of the Morpho sulkowskyi butterfly could inspire a new, simpler approach that both absorbs the IR photons and gives an optical readout, with no cooling or heat sink needed.

To prove their point, Potyrailo’s team took scales from butterfly wings and doped them with single walled carbon nanotubes (SWNTs) to absorb more IR radiation. ’The chitin-based material of the Morpho tree nanostructures does absorb over the 3-8?m spectral range [the IR spectrum runs from 0.7-300?m],’ explains Potyrailo, but SWNTs do as well, so adding them helps to heat the Morpho nanostructures more efficiently.

As the SWNT doped scales of the butterfly absorb heat, the nanostructures expand, changing the wavelength of the reflected light. But butterfly wings obviously aren’t a sustainable way to make IR imaging gear. Instead, the group suggest other materials, such as fluoropolymers and silicones, which can be used to make nanostructures based on those of the Morpho butterfly and should outperform them.

Mohan Srinivasaro, who work’s with on the optical properties of structures like butterfly wings at Georgia Institute of Technology in Atlanta, US, says he finds the work to be ’a very clever use/implementation of the natural photonic structures found on the wingscales of tropical Morpho butterflies.’ He adds that in his opinion ’the more we look carefully at these structures we are going to find more ways of using such structures. This paper does make a beautiful case for looking at these scales from multiple points of view.’

The next step, says Potyrailo, is to fabricate these thermally sensitive nanostructures as thin films. ’We plan that the infrared light will come from one side of the bio-inspired thin film and will heat up the film,’ he says. ’The other side of the film will be iridescent and iridescence will locally change its colours upon local heating.’