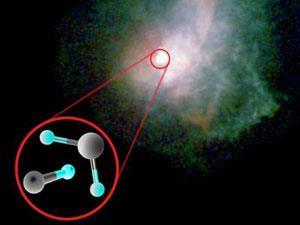 After decades of searching, astronomers at last appear to have found two key components of the dust that forms around stars – the oxide and dioxide of titanium. The finding confirms a key theory about the formation of stellar dust and could give clues about the origins of the so-called stellar wind, which lifts material from a star’s surface and draws it outwards, causing the star to expand.

The international team of researchers trained the Submillimetre Array (SMA) telescope in Hawaii on the giant star VY Canis Majoris, one of the largest stars in the universe – 1000 to 2000 times the size of the Sun. The star is expanding and ejects large quantities of material as a dusty nebula. The spectral lines picked up by the telescope included, for the first time, the signature of titanium dioxide. The fingerprint of titanium oxide was also seen. ‘This is the first time that titanium dioxide has been observed in space,’ says team member Tomasz Kaminski of the Max Planck Institute for Radio Astronomy in Germany. Titanium oxide has been seen closer to the surface of stars, but its presence in the dust cloud is, says Kaminski, extremely rare.

The formation of dust around a star and its subsequent ejection are poorly understood. Astronomers believe that certain key molecules that can survive temperatures of more than 1000K might act as nucleation centres for other molecules which then coalesce to form dust particles. These could then be struck by photons of light coming from the core of the star, propelling the particles outwards. Two candidates for these nucleation cores are the two oxides of titanium. The newly observed unambiguous signals of the titanium oxides lends strong support to this idea. However, there appears to be more of the two molecules in the gas phase – rather than as dust – than predicted, which still remains unexplained.

The discovery of the two oxides was possible because of the high sensitivity of the SMA, in which eight antennas work together effectively as one large telescope 226 metres across, and the long period – around two weeks – over which the observations were made.

‘The authors should be congratulated on what is the culmination of an heroic effort in searching for these lines,' says Brad Gibson, a computational astrophysicist at the University of Central Lancashire in the UK. 'They have steadfastly eluded detection for 30-plus years, and for those working towards an understanding of the fine balance between gas-phase and dust-phase abundances, the detections are warmly welcomed.’