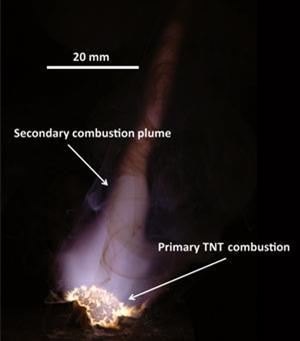 A short exposure, small aperture shot of the TNT formulation burning. The purple colour is down to the potassium perchlorate

It might seem counterintuitive but one way of making decoy flares for fighter planes better and safer is to make them out of TNT, say European scientists.

Decoy flares are pyrotechnic devices shot out of aeroplanes to confuse heat seeking missiles. For the simpler missiles a hot flame will suffice but technology is always improving and advanced missiles now look for the tell tale signatures of water and carbon dioxide to distinguish between a plane and a flare. Of course, this means more complex flares are being developed to confuse the missiles once again but the ingredients leave a little to be desired.

Two common approaches use either potassium perchlorate and potassium benzoate, which are known to be sensitive to friction and impact, or nitroglycerine and nitrocellulose, which are also very shock sensitive. Carrying shock sensitive materials on a plane that might be attacked seems like a dangerous move. Ernst-Christian Koch, of Nato’s Munitions Safety Information Analysis Centre in Brussels, Belgium, in collaboration with Volker Weiser and Evelin Roth of the Fraunhofer Institute for Chemical Technology in Pfinztal, Germany, agree and started to look for alternatives but their solution may be surprising - 2,4,6-trinitrotoluene, or TNT.

Although TNT was discovered in the 19th century, Koch says, it took decades to find out that it was a fierce explosive. ‘If you light TNT it’s a yellow-white material that burns with a very sooty flame and I used to show that when I lectured chemistry to demonstrate that it is quite an insensitive energetic material.’ That background knowledge made Koch think that TNT could be useful for decoy flares.

Koch combined TNT with the oxidiser potassium perchlorate and at a 35:65 ratio the formulation shows a high peak in the CO2 range and much improved shock and friction sensitivity.

‘TNT has always been used as a high explosive material in the field of energetics but its use as a binder in pyrotechnics, and its use in pyrotechnics in general, has never been done or explored previously,’ says Tom Klapötke, who works on energetic materials at the University of Munich, Germany. ‘The fact that Koch et al were able to achieve an overall increase in both spectral efficiency and colour ratio represents a significant achievement in the field of countermeasures research.’

Despite the good spectral match and improved sensitivity the formulation isn’t perfect, admits Koch. ‘This is as good as we can get at present,’ he explains, but although the formulation can be considered shock insensitive, it is not yet stable enough to be classified as impact and friction insensitive, which would obviously be ideal.

Koch is now working to make the flares even better, as well as trying to replace the oxidant due to regulation surrounding potassium perchlorate use in the US. The sooty flame of TNT could also be useful for confusing the simpler missiles that just look for black body radiation, Koch says. It seems the use of TNT in warfare could be seeing a resurgence.