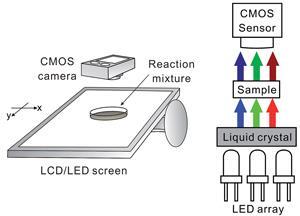 Scientists in Taiwan have put together a system that uses a computer screen and digital camera to obtain spatial, temporal and spectral information on reaction samples, with a set-up cost of just £400.

Pawel Urban who led the research at National Chiao Tung University, Taiwan, points out that ‘chemical processes occur in space and time, but few analytical methods provide both spatial and temporal information’. Most chemical reaction mixtures are also not homogeneous, but traditional spectral techniques for monitoring them assume homogeneity. Pawel believes it is important to look into the intrinsic non-uniformities which can affect the progress of chemical reactions.

‘We were curious if common equipment and simple programming could be used to develop inexpensive yet powerful analytical methodologies to study non-homogeneous and dynamic samples,’ adds Urban. They used an LCD/LED display as a cheap monochromatic light source, with a petri dish on top of the screen to hold the reaction mixture and a digital camera to monitor the reaction. Eye-catching non-linear reactions were chosen to demonstrate the effectiveness of the system – the Belousov–Zhabotinsky (BZ) reaction, with its beautiful propagating wave patterns, and the Old Nassau clock reaction, an old favourite for chemistry demonstrations. 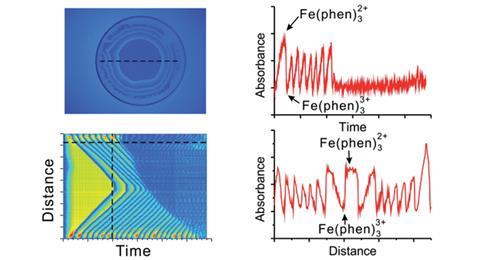 Flashes of light were emitted from the computer screen at three different wavelengths. Transmitted light was filmed by the digital camera and the analytes were distinguished by their spectral characteristics, with the light absorption patterns at the different wavelengths recorded by splitting the videos into individual frames. The system was tested on compounds that absorb in the visible range 400–700 nm, but the next step is to expand this wavelength range.

Analytical chemist Conor Hogan, of La Trobe University in Australia, says the work is a very nice example of the growing use of seemingly non-scientific equipment, like cameras and phones, to make scientific measurements. ‘The ability to exploit such devices for non-intended applications such as spectroscopy, electrochemistry or microscopy is exciting because it has the potential to make chemical measurement, and science in general, available to a greater number of people.’