German researchers have developed an inexpensive three-step continuous flow synthesis of artemisinin, the key drug in the ongoing fight against malaria. Fran?ois L?vesque and Peter Seeberger from the Max Planck Institute for Colloids and Interfaces in Potsdam say that their approach could supplement existing production, improving the drug’s availability. 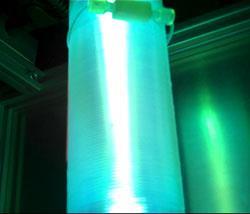 After only four and a half minutes in the flow reactor, artemisinic acid is converted into artemisinin

Seeberger tells Chemistry World that yields of artemisinin made using this technique have already increased from when the paper was first published. At that point yields were 200g of artemisinin per day per reactor, but now stand at 800g. ’We are about three months away from being able to conduct it on a 2kg per day scale,’ Seeberger adds. ’If you take that number, then you need approximately 150 reactors to make the entire world’s supply for a year. And we have reduced the cost of the equipment. The one we described is about €50,000 (?42,000). We’ve got the price down to about €10,000 now.’

Artemisinin is the most effective therapy in the fight against the plasmodium parasites responsible for more than 200 million cases of malaria each year. Currently, the drug is extracted from sweet wormwood plants. This means that supplies of artemisinin are limited. And its fused ring structure with an endoperoxide group, which gives it its killing power, makes synthesising it from scratch impractical. Consequently, Seeberger and L?vesque instead began their synthesis from artemisinic acid, a by-product generated by current artemisinin production in quantities up to 10 times the mass of the drug. It can also be produced by genetically-engineered yeast. 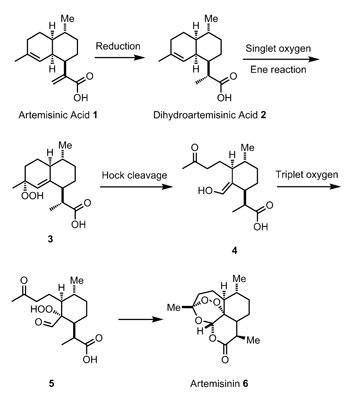 The two chemists began by reducing artemisinic acid to dihydroartemisinic acid, prior to the critical synthetic step of reacting it with singlet oxygen to form a hydroperoxide. The highly reactive singlet oxygen molecule must be produced by a photochemical reaction. This can trouble large-scale manufacturing, as light only penetrates a limited distance into batch reactors. However, by pumping reagents continuously through tubes wrapped around a lamp, Seeberger and L?vesque could illuminate the entire solution efficiently.

Martyn Poliakoff, at University of Nottingham, UK, who has also investigated singlet oxygen flow chemistry, calls the artemisinin synthesis ’an elegant piece of work’. ’I hope it will promote interest in continuous flow reactions and photochemistry,’ he commented. ’I also hope it will lead to more widely available treatments for malaria.’

Seeberger shares a similar outlook, with a spin-out company based on the technology in the pipeline. ’I’m very excited about the prospect of being able to get this to the people who need it,’ he says.