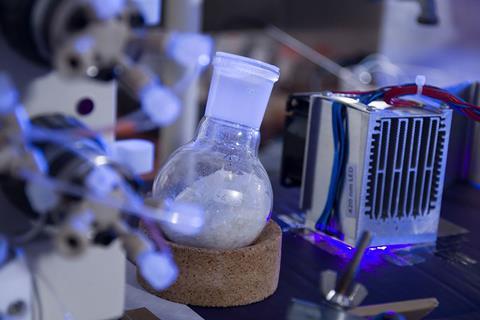 Source: © MPI for Colloids and Interfaces

A key molecule used to make antimalarial drugs can now be directly prepared from a crude plant extract without purification. The new process is powered by the plant’s chlorophyll and could make antimalarial treatments cheaper and more widely available.1 The method is being commercialised with plans to start industrial production in 2021.

Over 200 million people are infected with malaria every year. The most powerful drugs to treat this disease are based on artemisinin – a compound that can be isolated from the sweet wormwood plant (Artemisia annua). The molecule’s activity is believed to derive from an endoperoxide bridge, which selectively damages the parasites that cause the illness. But production of artemisinin currently depends on cultivating the wormwood plant, so alternative methods are being sought. While total synthesis is too complicated and expensive to produce enough artemisinin to meet global needs, semi-syntheses from precursors such as dihydroartemisinic acid (DHAA) are a good option.

In 2012, Peter Seeberger and colleagues at the Max Planck Institute of Colloids and Interfaces, Germany, developed a semi-synthetic process to make artemisinin using continuous flow photochemistry.2 Although that approach solved a main challenge in artemisinin synthesis – the production of singlet oxygen to form the endoperoxide bridge – it required the addition of a dye to the pure precursor. Now, the German team has replaced this artificial photocatalyst with the plant’s own chlorophyll.

‘This work represents the first example of a natural product being produced using the readily available machinery from the plant itself to drive the transformations necessary, as opposed to using additional – generally expensive – catalysts,’ says Seeberger’s colleague Kerry Gilmore who led the study. ‘We are also able to do this using a messy crude extract solution, obtaining higher efficiencies and productivities than using pure catalysts and reagents. This makes the process significantly cheaper, but also faster and more green.’

ArtemiFlow, a start-up company based in Kentucky, US, is now taking the lead in commercialising the new technology. 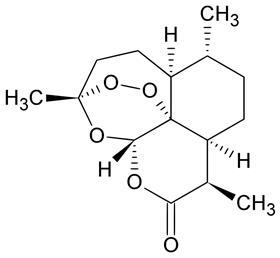 The sweet wormwood plant contains about 1% artemisinin, along with DHAA and other materials that are typically discarded. In their two-step process, the researchers use this ‘waste’ to produce more artemisinin. The method is also quite simple: first, the starting material is extracted from the plant in toluene. The resulting green solution is then mixed with trifluoroacetic acid and oxygen gas and passed through a continuous flow photoreactor – with no further purification or processing required – where it is irradiated with blue or red light. The plant’s chlorophyll absorbs light and transfers that energy to molecular oxygen, which is excited and can then react with DHAA. ‘After 15 minutes, we produce the same result as the plant achieves naturally in three weeks,’ Gilmore says. ‘The process is so efficient, we can convert up to 100 times the natural levels of DHAA in the plant, meaning we can add material from additional sources directly to our feed without any modification to the system.’

Shawn Collins, a chemist at the University of Montreal, Canada, calls it an ‘innovative approach that combines the biosynthetic pathways from a biological source and stepwise chemical synthesis’. ‘This is by far the most straightforward method to prepare artemisinin that I have seen,’ adds Timothy Noël at Eindhoven University of Technology, the Netherlands. ‘I would be very interested to see a cost calculation for this new synthetic route and how it compares to the extraction process.’

Gilmore is certain that the new method will be cheaper. He points out that the continuous flow technique is more efficient than the batch technology pioneered by Sanofi.3 ‘We have spent the last six years perfecting not only the chemical synthesis of artemisinin and its derivatives, but also understanding and optimising steps along the entire supply chain. We have developed best practices at essentially every step,’ he says. ‘By implementing these improvements and having the entire supply chain in one location, we will be able to produce artemisinin derivatives significantly cheaper than ever before. We aim to begin production in three years.’