Physical chemists in Germany and Switzerland have combined two different techniques to investigate the reactivities of different conformers – a type of stereoisomer – and found one reaction that went 50% faster for one conformer over the other. While general reaction mechanisms are understood, exactly how this works on a molecule-by-molecule basis is still being teased apart.

Conformers are isomers of the same molecule where rotation around a bond gives different arrangements. In the case of 3-aminophenol (3AP), the OH group can rotate so that the hydrogen atom points in one of two different directions. These two arrangements have two different dipoles and a team of European researchers have now shown that these variable dipole moments mean that one conformer reacts one-and-a-half times faster than the other. 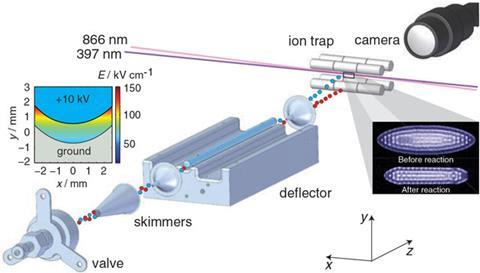 It’s well known that different conformers can react differently, but until now chemists had to use bulky groups to constrain molecules in these different conformations, which could also change the reactivity of the molecules. ‘True reaction mechanisms,’ explains Stefan Willitsch of the University of Basel, ‘have not been proven as such.’

To try and rectify this, Willitsch teamed up with Jochen Küpper’s group at the German Electron Synchrotron to combine their expertise. The resulting technique first separates the different conformers using an electric field before firing individual conformers at a crystal of calcium ions cooled down to close to absolute zero, called a Coulomb crystal. Because the ions in the crystal are so well defined, by watching to see when one ion reacts with 3AP and disappears they can measure the kinetics. The team found that cis-3AP reacted one-and-a-half times faster than trans-3AP.

That result is not unexpected, explains Willitsch, who describes how the team of physical chemists dusted off their organic chemistry textbooks to find a simple reaction that could be used to test their new technique. For the test reaction, the long range electrostatic effect of the two conformers having different dipole moments was expected to dominate. But having proved their new approach works, the team can now investigate the different kinetics involved for different conformers.

‘It’s a remarkable combination of two state of the art techniques,’ says Jeremy Hutson, who works on ultra-cold chemistry at Durham University, UK. But while the techniques used are related to ultra-cold chemistry, the result is not itself an ultra-cold technique. ‘It’s more an artillery experiment,’ agrees Willitsch, referring to the beams of molecules fired at the cold Coulomb crystal.

For physical chemists more used to working with atoms and diatomic molecules, looking at the reactions of 3AP is an impressive start. Indeed, Hutson describes it as very interesting that the technique can work with molecules ‘quite that big’. But for Willitsch, this is just the beginning; there are some big organic chemistry textbooks that need to be worked through.