A multi-million pound centre acting as a one-stop-shop for firms looking to contract out their materials chemistry research has officially opened in the north of England.

The ?15 million Knowledge Centre for Materials Chemistry (KCMC) was opened by John Denham, Secretary of State for the UK department for innovation, universities and skills on 26 March. The centre will provide commercial companies with access to experts and specialist facilities at the Universities of Bolton, Manchester and Liverpool and the Science and Technology Facilities Council Daresbury Laboratory.

The centre has been set up to facilitate partnerships between business and academic research groups with appropriate facilities and capabilities. ’There was a strong suspicion that companies would collaborate more with the universities if they could go to just one team, and that team would find them the right group of people and researchers from the four partner institutes,’ explains John Bancroft from the Daresbury Laboratory, who helped set up the centre. The role of the centre is to act as ’a brokering service between customers in industry that need R&D doing and the providers that are the three universities and Daresbury’, he says. 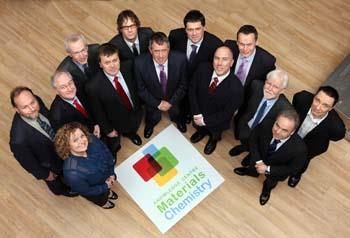 John Conti-Ramsden, the KCMC director, says that he hopes to ’stimulate a much more intense interaction between the partner institutions and industry, and to facilitate new opportunities and new project opportunities that otherwise would not have happened’.

Approximately ?8 million of the initial funding comes from the Northwest Regional Development Agency - which leads economic development and regeneration in England’s northwest - and will be used to run the centre, help the partners improve the services they offer and will also be distributed as grants to qualifying companies using the centre’s services. The remaining ?7 million is from academic commitment and resources by the academic partner institutions.

Income from industry and international grants is anticipated to bring more than ?15 million over the next five years, with the centre expected to eventually become self sustainable, says Bancroft.

The centre has also brought new jobs to the area, with employees in four newly created positions running the KCMC under Conti-Ramsden, and around 15 dedicated project scientists within the various centres. ’The funding has also secured new posts within the partner institutes,’ adds Bancroft.

To broaden its services further, the centre will also be working with other similar organisations such as METRC (Molecular Engineering Translational Research Centre), which offers soft nanotechnology services for eight universities in the north of England, says Bancroft.