Researchers have observed a peptide molecule changing shape in real time. The ultrafast process - which takes place over a matter of picoseconds (10-12 s) - was monitored using a technique called transient two-dimensional infrared spectroscopy, which has a far greater time resolution than other methods of observing structural changes in molecules, such as NMR.

The technique provides a potentially powerful new tool for understanding key structural changes that take place in proteins, which are crucial to the protein’s functional properties in living systems.

Michael Hamm and colleagues from the universities of Zurich in Switzerland and Bochum in Germany used the method to observe the unfolding of a small cyclic peptide in solution, involving the breaking of a hydrogen bond1.

Hamm told Chemistry World that while it would be difficult to apply the technique to large proteins, the method could provide a way to validate computational molecular dynamics models. ’Molecular dynamics simulations have been extremely successful but are often based on quite major assumptions,’ he said. ’We are providing an experimental system that can validate some of the theoretical concepts.’ 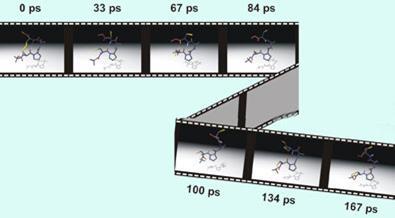 In a commentary accompanying the publication of the results2, Minhaeng Cho of Korea University, Seoul, said, ’Although two-dimensional infrared spectroscopy has not yet burgeoned into a systematic discipline, its applications - such as studying the ultrafast dynamics of biomolecular and chemical reactions, or of protein interactions with other molecules - may be waiting just around the corner.’

’The experimental and computation-based times are in reasonable agreement, thereby validating current molecular dynamics methods and giving us confidence in our interpretation of molecular events on longer timescales,’ he added. ’These experiments could serve as a benchmark for further forcefield development - a clear challenge for theoreticians.’

Harry Gray, professor of chemistry at the California Institute of Technology, has been awarded $970 000 (?518 000) to study the structures, dynamics, and misfolding of malignant pr...

NMR and the 3D world of proteins