Walls and self-cleaning windows could act as reaction sites for pollutant gases in the atmosphere, creating harmful by-products

Independent teams of researchers in the UK and the US have shown that nitrogen oxides in the atmosphere can participate in chemical reactions on the surfaces of buildings, indoors and outdoors, producing harmful pollutants including the respiratory irritant nitrous oxide, the toxic gas nitrosyl chloride and hydroxyl radicals.

Rod Jones’ team at the University of Cambridge in the UK investigated the fate of NO2 when it comes into contact with glass that has been coated with titanium dioxide.1 TiO2-coated glass is available commercially as a self-cleaning product in which the TiO2 photocatalytically degrades organic dirt in the presence of sunlight. In addition, TiO2 has been incorporated into other building materials, such as paints and cements, as a means of reducing pollution by removing nitrogen oxides (NOx) from the atmosphere.

The Cambridge researchers passed NO2 over TiO2-coated glass slides and used highly sensitive broadband cavity enhanced absorption spectroscopy to measure the products. They found that the removal of NO2 from the air was accompanied by a substantial production of gaseous nitrous acid (HONO) - something that had not previously been detected.

’Not only is HONO a harmful respiratory irritant, it is also broken down by sunlight into nitrogen oxides and OH radicals, which help produce ozone in the atmosphere,’ says Jones. ’In other words it would seem that titanium dioxide is not as effective as people thought in terms of pollution reduction. The presumption was that it gave a net beneficial effect and what we have shown is that it may not do so. This finding has direct and serious implications.’ 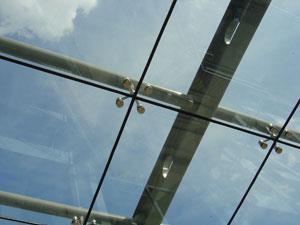 Commenting on the work, urban air pollution expert David Carslaw of the University of Leeds in the UK says ’This paper is a valuable contribution on a topical subject that rightly anticipates some potential negative impacts to atmospheric pollution related to TiO2 on surfaces. There are several local authorities across the UK evaluating these surfaces as a means of reducing concentrations of NOx and NO2 in the urban environment so this work is very timely.’

Meanwhile at the University of California in Irvine, Barbara Finlayson-Pitts and her colleagues passed NO2 and HCl - both of which occur in the atmosphere as products of combustion - into a chamber containing powdered silica pressed into pellets to mimic silicate-rich surfaces typically found in urban areas such as walls and soil, and measured the resulting products.2 They showed the formation of the potentially harmful gases nitrosyl chloride, ClNO, and nitryl chloride, ClNO2.

’Although these experiments are performed using higher mixing ratios than found in the atmosphere, the fact that similar ClNO yields are obtained with NO2 concentrations varying over two orders of magnitude is a good indication that this chemistry will occur at lower concentrations typically found in air both indoors and outdoors,’ the researchers say.

Nicola Carslaw, who studies air quality at the University of York in the UK says, ’There is currently a lot of interest in indoor air pollution and its effect on health. We do not really know what is causing these health effects and chlorine has been suspected as a possible contender. If we can find additional pathways of chlorine chemistry in indoor spaces, this could be significant.’ Referring to the work on TiO2 Carslaw says that the fact that HONO might be generated indoors is doubly significant in that its subsequent degradation by light would be much slower than outdoors, allowing it to persist for longer. Carslaw adds, ’One interesting aspect of both these pieces of work is that they demonstrate that the chemistry of air quality indoors and outdoors can overlap in key details and that it is important for researchers in both areas to keep an open mind and to talk to each other - they are often seen almost as separate disciplines.’