US researchers have developed an efficient way of producing hydrogen from urine - a feat that could not only fuel the cars of the future, but could also help clean up municipal wastewater.

Using hydrogen to power cars has become an increasingly attractive transportation fuel, as the only emission produced is water - but a major stumbling block is the lack of a cheap, renewable source of the fuel. Gerardine Botte of Ohio University may now have found the answer, using an electrolytic approach to produce hydrogen from urine - the most abundant waste on Earth - at a fraction of the cost of producing hydrogen from water.

Botte says the idea came to her several years ago at a conference on fuel cells, where they were discussing how to turn clean water into clean power. ’I wondered how we could do this better,’ she adds - so started looking at waste streams as a better source of molecules from which to produce hydrogen.

Urine’s major constituent is urea, which incorporates four hydrogen atoms per molecule - importantly, less tightly bonded than the hydrogen atoms in water molecules. Botte used electrolysis to break the molecule apart, developing an inexpensive new nickel-based electrode to selectively and efficiently oxidise the urea. To break the molecule down, a voltage of 0.37V needs to be applied across the cell - much less than the 1.23V needed to split water. 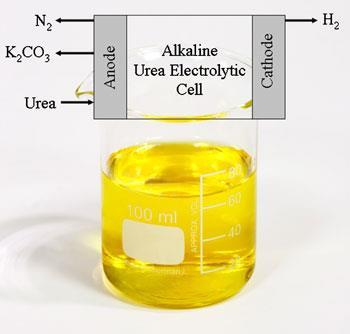 ’During the electrochemical process the urea gets adsorbed on to the nickel electrode surface, which passes the electrons needed to break up the molecule,’ Botte told Chemistry World. Pure hydrogen is evolved at the cathode, while nitrogen plus a trace of oxygen and hydrogen were collected at the anode. While carbon dioxide is generated during the reaction, none is found in the collected gasses as it reacts with the potassium hydroxide in the solution to form potassium carbonate.

The group initially tested their process with ’synthetic’ urine made of dissolved urea, but also showed that the process works just as well with real human urine. ’It took us some time to get clearance to work with human urine - which held up publication of the research,’ says Botte.

According to Botte, currently available processes that can remove urine from water are expensive and inefficient. Urea naturally hydrolyses into ammonia before generating gas phase ammonia emissions. These emissions lead to the formation of ammonium sulphate and nitrate particulates in the air, which cause a variety of health problems including chronic bronchitis, asthma attacks and premature death.

The group are currently conducting long term stability studies on their electrolysis systems, as well as conducting computational experiments to better understand the mechanisms at work.

Botte believes the technology could be easily scaled-up to generate hydrogen while cleaning up the effluent from sewage plants. ’We do not need to reinvent the wheel as there are already electrolysers being used in different applications.’ She believes the only the thing that would hamper the process would be the presence of a lot of salt.

Bruce Logan, an expert in energy generation from wastewater and director of Pennsylvania State University’s H2E Center and Engineering Environmental Institute, applauded Botte’s efforts in developing a more energy efficient way of producing hydrogen than splitting water. However, he did caution that urea gets converted very quickly into ammonia by bacteria, which could limit the usefulness of the technique.

However, Logan does feel that it would be a good idea to start saving up our urine - although not for the hydrogen. ’You have to remember about the P [phosphorus] in pee - globally we need to start thinking about conserving phosphorus for fertiliser, because, just like oil, one day the deposits are all going to run out and we need to start building phosphorus recycling into our infrastructure,’ he says.