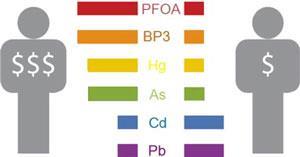 Concentrations of 18 potentially harmful chemicals in US citizens’ blood and urine are linked to income: half to being poorer and, surprisingly, half to being richer. Researchers from the University of Exeter, UK, found an association between high levels of nine compounds and metals, including bisphenol A, total lead and cadmium, and low incomes. But the others, including total arsenic, mercury and thallium concentrations, were increased in those with high social status.

The Exeter team wanted to test the ‘environmental justice hypothesis’ that poorer people have higher levels of worrying chemicals in their systems. ‘We would expect them to live in more industrialised neighbourhoods or have more industrialised jobs,’ Jessica Tyrrell tells Chemistry World. They took data from the US National Health and Nutrition Examination Survey (NHANES), which assesses health and nutrition of adults and children nationwide.

The NHANES monitors 200 chemicals in around 5000 people each year, reporting data every two years. Tyrrell and co-workers examined five NHANES waves between 2000 and 2010 for links between income and concentrations of 179 chemicals tested in more than two waves. The NHANES records factors like diet, occupation and smoking that could explain why some people have higher levels of certain chemicals.

Smoking, occupation and diets low in calcium and iron mediated the link between cadmium and lead levels and lower incomes, Tyrrell’s team found. Meanwhile, seafood consumption was an important mediator of the link between high mercury concentrations and higher income, and had indirect or partial roles for arsenic, thallium and perfluorooctanoic acid. Sunscreen use had a ‘robust indirect effect’ on benzophenone-3 levels in this same group.

Potentially harmful chemicals in different groupings in the population needs greater attention, Tyrrell stresses. ‘When considering chemical burden in humans, focus should not solely be on those living below the poverty threshold. The type of chemical is critical. To date studies have focused on one chemical, whereas in reality we are exposed to a whole cocktail. Research needs to start investigating whether synergistic relationships exist between them.’

Hannu Kiviranta, head of the chemical exposure unit at the Finnish National Institute of Health and Welfare says Tyrell’s team’s work shows the environmental justice hypothesis should be reassessed. ‘But when it comes to recommendations to avoid contaminants one should be very careful,’ he adds. ‘Fish has many healthy nutrients, so it can be bad for your health if you start avoiding fish because of contaminants.’