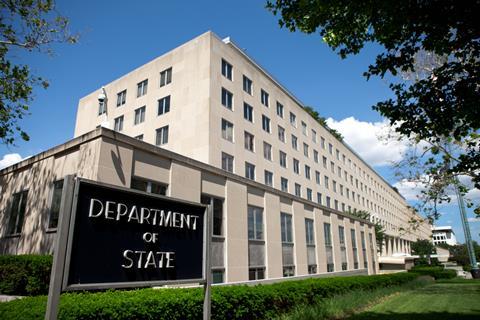 A substantial reorganisation of the US State Department is under way. Priorities have now shifted at the department and it appears that science is being sidelined

Atmospheric chemist Vaughan Turekian, who began what is typically a three-year post as science and technology adviser to the US secretary of State in September 2015, has resigned. Turekian left the State Department on 14 July to head up the National Academies’ science and technology for sustainability programme, which aims to create and strengthen connections between scientific research, technological development and policymaking.

Although neither Turekian nor representatives from his State Department office would return enquiries from Chemistry World, sources close to him say that science and technology do not appear to be a top priority for the Trump administration. The White House has yet to fill a number of key slots for political appointees in these areas, and they suggest that Turekian’s departure is part of a ripple effect of this neglect.

These sources say that the State Department’s priorities have shifted under the new administration, and that Turekian’s office will likely be revamped as part of a larger reorganisation of the agency. In fact, there is some question whether the State Department science and technology adviser position, which was established in 2000, will even be continued.

Meanwhile, Turekian’s departure has attracted the attention of the American Association for the Advancement of Science (AAAS). ‘The [science and technology] adviser has been uniquely positioned to engage the various divisions of the department and the scientific community outside of the government to develop and implement negotiating positions and statements,’ said AAAS’s chief executive Rush Holt. He called on Secretary of State Rex Tillerson to ‘quickly appoint a respected scientist or engineer’ as his new science and technology adviser.

‘For over 16 years, the [science and technology] adviser has served the administrations of both parties to ensure that the State Department has an array of scientific expertise at its disposal to inform and assist in policy development, implementation and evaluation,’ stated Holt, a former congressman and physicist. ‘The position and office help the department to understand the foreign policy and diplomatic implications of advances in areas such as artificial intelligence, gene editing, 3D printing, as well as traditional areas of international agreements on oceans, satellites and research facilities,’ he added.