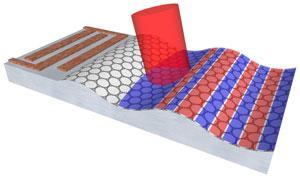 Two independent groups have shown that light can be effectively turned into surface plasmons in graphene if the carbon sheet is made to vibrate. The proposal could solve the problem of how to generate this electronic phenomenon in graphene, and could one day help integrate optical and electrical data processing.

Optics and electronics are both widely used to carry data in telecoms, but it is currently difficult to switch from one medium to the other without incurring heat losses and time delays. Plasmons – waves of confined electrons in a conductor – could help. In principle, light incident on a conductor can rouse the conduction electrons into a plasmon, which can then be processed by electronic components.

Ideally this would be performed in graphene, the honeycomb-like layer of carbon atoms that has found increasing uses since it took the physics Nobel prize in 2010. Graphene’s unique conduction properties allow it to sustain long-lasting plasmons whose characteristics can be tuned through chemical doping or external voltages. The only problem is that plasmons in graphene often have a much shorter wavelength than incident light, which makes them tricky to generate.

One method is to pattern the graphene into narrow ribbons, which diffract the incident light into various wavelengths, including those that will generate plasmons. But patterns cannot be tuned, and plasmons can also scatter off their edges, leading the electron waves to dissipate more quickly. ‘The problem of efficiently exciting the plasmons preoccupied me for months, until I came up with this idea of using vibrations,’ says Mohamed Farhat at the King Abdullah University of Science and Technology, Saudi Arabia.

Farhat and colleagues are one of two groups that have independently proposed the use of acoustic vibrations to allow light to couple to graphene plasmons. Vibrations essentially manifest as temporary patterns to diffract incident light. But unlike permanent patterns, vibrations are tuneable and, since they have no edges, the generated plasmons are long-lasting.

The KAUST group want to generate their vibrations with a mechanical actuator attached to one end of a graphene sheet, which lays on a substrate.1 Meanwhile, Jürgen Schiefele at the Complutense University of Madrid in Spain and colleagues want to generate their vibrations using a piezoelectric material placed beneath the graphene.2 Such a material is easily fabricated by the existing microelectronics industry, says Schiefele. Farhat adds: ‘The final result is the same … Only the method differs.’

Frank Koppens, an expert in graphene plasmonics at the Institute of Photonic Sciences, Spain, says both groups have come up with ‘something very ingenious’. ‘They propose an alternative method of exciting plasmons in graphene, which could be much more efficient, practical and directly realisable on a chip,’ he says. ‘The coupling of sound waves and light is strong for graphene and, as the authors show, this can be utilised.’

Both groups are now planning to test their proposals experimentally. ‘We are collaborating with external partners in order to verify these ideas,’ says Farhat.