The tenth Tetrahedron Symposium in Paris opened its doors to the virtual world this year, with presentations being streamed over live video webcasts and delivered to desktops worldwide. However, the idea has met with mixed reactions from the community, with concerns over presentation of unpublished results jeopardising later journal publications.

The idea behind the virtual conference is to extend the audience to those who could not physically attend, explains Nigel Clear, commercial director of science and technology conferences for publishing company Elsevier, which organises the symposium. ’This isn’t going to replace physical conferences, which are a primary means of academic communication,’ he explains. ’We want to augment the physical event by making the content of the conference accessible to more people.’

After paying a reduced registration fee (

600 to attend in person), virtual delegates can log in to the event, which is set up to look like a real conference using a platform similar to the Second Life 3D virtual world. Delegates can ’attend’ talks live, chat and network with other online delegates and even visit posters and virtual exhibition booths. They can then access the presentations on-demand after the conference and download PDF copies of posters (around 110 of the 661 posters are currently available). Delegates at the physical conference can pay a supplement of 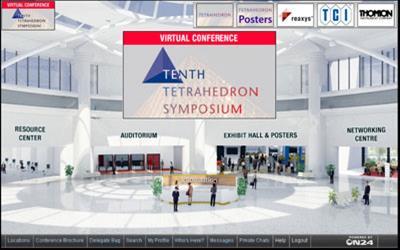 But by recording the speakers, what was previously a transient medium becomes permanent, and there is a risk that those presenting unpublished results could have that work refused by journals on the grounds that it has already been ’published’.

’I don’t have the right to deny my students papers, just because I want to present their work at a conference,’ says Barry Trost of Stanford University, US, especially in a world where so much relies on publication. He adds that, while there is a definite role for more tutorial and review-style talks - especially to expose students to new areas of chemistry - ’part of the idea of conferences is to convey ideas that are still being formulated, to share the problems you’re facing and get feedback from colleagues. It’s that exciting edge of the science that you lose.’

Karel Nederveen, publishing director for chemistry at Elsevier, agrees that pre-publication is a tricky problem: ’The community, including the publishers, needs to hammer it out and agree on what constitutes publication.’ He explains that in other fields such as vaccine research, where the virtual conference concept has been trialled, publishers have taken a more relaxed view. ’We don’t want authors to feel limited or constrained in what they present, but at the moment they might,’ he adds. 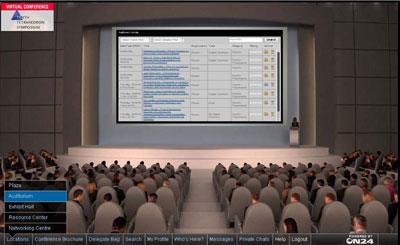 The virtual auditorium, where virtual attendees can select the presentations they want to attend and set reminders

The virtual Tetrahedron event will be online for six months after the physical conference and will only be accessible to those who register, so Clear argues that this closed audience and limited access time means that the content of the presentations should be treated like that at any other conference.

Dafydd Owen of Pfizer Research Chemistry in Sandwich, UK, attended the virtual event and sees the on-demand access to conference material as a significant advantage, particularly for the posters: ’Having the rich scientific content of the posters available for download counteracts the haste and hurry of the live sessions. For people physically attending, they can spend that time talking to the authors, knowing that the rest are available to go through at their leisure - so it might change the dynamics of the poster session.’

But despite the convenience of the virtual event, Owen is conscious of the potential drawbacks: ’If this were to influence what people put up, either in poster or speaking format, then that would be a backward step,’ he says. ’As scientists, both industrial and academic, we have built up a conferencing ethos and I wouldn’t want that compromised by conservatism or holding back the latest results.’

There is also the issue of what happens to video footage once the virtual conference is over. Speakers at the symposium were quick to point out the potential of a library of video presentations as an invaluable teaching resource. ’For students this could be very helpful,’ says Trost, ’but it would really have to be available for free, or at worst something like a journal, where libraries could subscribe rather than the students paying individually.’

Clear agrees that the opportunities are wide open: ’We’re right at the beginning of a journey here - we can see the benefits, but where it goes will change and adapt depending on the users - we have no idea what the final product will look like.’