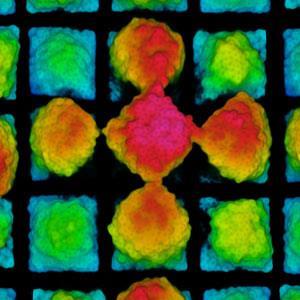 Scientists in the US have devised a stunningly simple way to direct colloids to self-assemble in an almost infinite variety of configurations, in both two and three dimensions. The technique, which relies on the creation of a pre-determined pattern of magnetic fields to generate a ‘virtual mould’ to dictate the final position of the particles, can be used to separate and distribute, in a controlled way, anything from living cells to ions.

‘The concept is trivial,’ Bartosz Grzybowski, who led the research team at Northwestern University, cheerfully concedes. ‘Why no-one thought of it before now is a good question.’

The system consists of a patterned grid of nickel, generated by photolithography, embedded in a layer of poly(dimethyl siloxane) (PDMS). This is placed on a permanent magnet. This forms a patterned magnetic field on the grid: on the nickel the field is strong, on the adjacent ‘islands’ where there is no nickel, the field is weak. 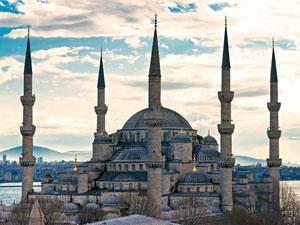 One of the patterned colloids is made of arches and unconnected domes, just like the Blue Mosque

Depending on the pattern of the grid and size of the diamagnetic particles, multiple configurations of the particles are possible. For example, if the non-magnetic voids on the grid can accommodate four diamagnetic particles, then the final pattern will consist of an array of four-particle clusters, whose distribution is dictated by the grid’s architecture.

How come nobody has ever thought of this before?

The team showed that the approach can work with living cells. A magnetic field applied to a suspension of Staphylococcus aureus pushed the bacteria onto the non-magnetic islands of the grid. As with other particles, it is possible to pattern clusters of cells in a range of different configurations. ‘We can push two different types of bacteria together onto a micro-island and then bind them together to make a “super-bug”,’ says Grzybowski.

The system can also move and concentrate different ionic species. ‘We dissolved a gold salt in a paramagnetic solution, and when we applied the field we saw the gold salt precipitate in the low-field regions,’ Grzybowski says. ‘One could see this as a possible way to separate and enrich ions from solution.’ 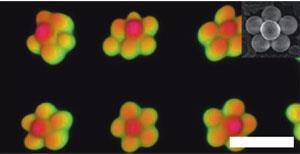 The ability to construct three-dimensional architectures from the colloids also arises, given that the magnetic field penetrates the space above the nickel regions. An excess of diamagnetic colloid, for example, will coalesce on a low-field island to build a pillar. A further excess of particles can build bridges between pillars to produce arches. Such complex three-dimensional structures could be useful for electronic circuitry. To illustrate the versatility of the approach, the research team patterned a grid in such a way to fashion  a microscopic facsimile of the Blue Mosque in Istanbul, featuring large ‘domes’ connected by arches, and surrounded by four unconnected satellite domes.

‘For me, one of the main aspects of this work is in being able to position particles, and in particular living cells,’ says Grzybowski. ‘We should be able to address things that cannot be addressed by other means.’

Stefano Sacanna, who researches colloid self-assembly at New York University, says: ‘This is the kind of work that makes you think how come nobody has ever thought of this before?’ Sacanna says that while template-assisted self-assembly is a well-known technique the new work has ‘completely redefined this concept, introducing virtual magnetic moulds that can manipulate either paramagnetic or diamagnetic colloids simultaneously’.

‘Their idea of modulating magnetic fields at the micron-scale using a combination of paramagnetic fluids and magnetisable composite films is, in its simplicity, extremely powerful,’ he adds. ‘Not only can these virtual moulds extend in the third dimension, but they can also be switched on and off on demand, allowing for the creation of dynamic and reconfigurable three-dimensional colloidal architectures. As if this was not impressive enough already, they showed how magnetic moulds can manipulate objects other than colloids, including ions and colonies of – live! – bacteria. This work greatly extends our ability to manipulate colloidal matter and holds the promise for new exciting opportunities in nano-fabrication.’