Waste seaweed from the alginate industry could decontaminate water from disused mines.

Waste seaweed from the alginate industry could be a cheap and effective way to decontaminate toxic water draining from disused metal mines, report European researchers. 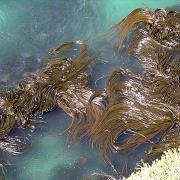 It has long been known that seaweed is an efficient adsorbent of many metal ions. Edyvean’s lab previously demonstrated that waste material from the alginate industry retained this ability.

’Most alginate, which is used in the food and pharmaceutical sectors, is extracted from various species of kelp,’ Edyvean told Chemistry World. ’The seaweed is typically macerated before undergoing a series of alkali and acid extractions to yield sodium or calcium alginate. The waste material can come in a variety of forms depending on the process used by the individual manufacturer, but might typically resemble coffee grounds. This has no real value and is usually dumped, or can be used as a soil conditioner.’

Edyvean and his team demonstrated that under laboratory conditions this dealginated biomass could remove a range of metal ions from solution with efficiencies of up to 99 per cent.

’Once the metals have been adsorbed onto the biomass it is simple to desorb them by a straightforward pH shift,’ said Edyvean. ’In principle this could allow you to strip ions from a large amount of relatively dilute waste, then desorb the ions into a much more concentrated solution.’

Edyvean first tested the system on a real waste stream from the electroplating industry. His team set up a mobile treatment unit, with two dustbin-sized vessels of waste seaweed, and took it to electrochemical plating companies who were producing waste streams containing ions such as copper, chromium and cadmium.

’We showed that most metals could be removed to an efficiency of 75-80 per cent,’ said Edyvean. ’However, we did have trouble with hexavalent chromium.’

With the new work on mine water, the team has so far experimented with small channels from streams, treating water flowing at a rate of about 10 litres per minute.   Now, they plan to scale things up ’and learn how to keep the water flowing through the bed efficiently to promote optimum adsorption, to find out how long the bed will last before it becomes saturated with metal, and to see if it is simple to regenerate the bed,’ said Edyvean. ’So far we are extremely pleased with the results - everything is working almost as well as it does in the lab. We now need to get the engineering right.’  Simon Hadlington