Water acts as a lubricant for molecular machines

Small shuttles and wheels on axles made from single molecules can be sped up with a small amount of water. That is the conclusion of Sander Woutersen’s group from the University of Amsterdam in the Netherlands whose interest in the role of water for these small machines started with a chance observation in the lab.

‘We’re interested in the speed and motion of these machines,’ explains Woutersen, who uses NMR and time resolved infra-red spectroscopy to observe the movement of the machines. During the measurements, one of the group noticed that the speed of the machines was different depending on which bottle of solvent they used. ‘It was a small effect,’ Woutersen says. ‘But it was there.’ The difference turned out to be the presence of varying amounts of water in the solvent, acetonitrile. 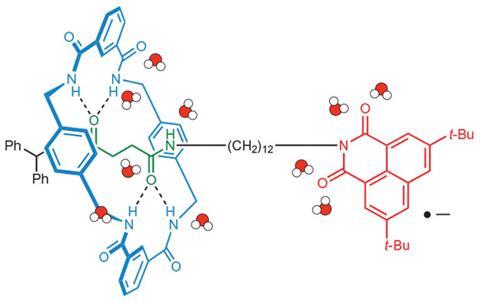 Using two amide-based machines from David Leigh’s lab in the UK, the group looked at how fast the machines moved when small amounts of various solvents, including water, were added to the main solvent. However, while water helped accelerate the motion of the machines, other solvents that could form hydrogen bonds with the machines had a much smaller effect or even slowed them down.

It seems that the water ‘lubricates’ the machines. But of course, what lubrication means at such small scales is slightly different to what it means when we think of adding grease to our bicycle chains, or oil to car engines. The process might not fit with the dictionary definition of lubrication, admits Woutersen, but it’s a useful metaphor. ‘The results seem to suggest that the water molecules that bond to the machines don’t lower the energy barrier of the machines’ motion,’ he adds. Instead, when the machine starts to move, hydrogen bonds within the molecular machines are broken and NH and CO groups are left dangling in solution. The water interacts with these dangling groups, stabilising the dislodged state.

‘They’re doing nice work,’ comments Klaas Wynne of the University of Glasgow, UK, who has used ultrafast spectroscopy to observe the role of water bound to the backbone of proteins as they fold. ‘Initially I thought it was going to be a thermodynamic effect, lowering the energy or something. But they’ve proved it’s not.’ What he says he finds really nice is that this work can show the kinetics, and how water can speed up these machines and he’s certain something similar might be happening in the protein-based molecular machines in our cells.

However, take away the water and proteins denature pretty quickly, which means that getting similar measurements for them would prove tricky. Instead, says Woutersen, these machines might prove to be model systems to really understand the role of water as life’s lubricant.