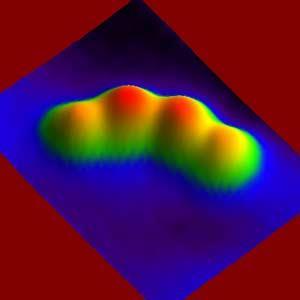 Scanning tunnelling microscopy (STM) has given the world stunning pictures of molecules’ structure and bonding, but can provide little information about small changes in a molecule’s position in space, or conformation. But now, Karina Morgenstern’s team from Ruhr University Bochum, Germany, has shown that to get a snapshot of the exact spatial orientation of a polar organic molecule, you need only look at the water surrounding it.

Small variations in a molecule’s conformation can have a large effect on chemical reactivity. Being able to identify these differences is one of the aims of high resolution spectroscopy.  And this goal may be one step closer, thanks to a technique that focuses on a layer of water surrounding a molecule, known as its first hydration shell. This layer is particularly useful because, as Morgenstern explains, everything in biology happens in water.

Morgenstern and colleagues used low temperature STM under ultrahigh vacuum to accurately determine the position of water molecules around two organic dye molecules – hydroxy azobenzene (4,4’-hydroxy-azobenzene) and aniline-nitro azobenzene (4-annilino-4’-nitro azobenzene). The first hydration shell of these dyes usually contains four water molecules, but by collecting information from just two of these, Morgenstern can determine the exact conformation of the dye.  To do this, she precisely measured the angle of the hydrogen bond between water and the molecule’s polar end group. Using this information, details about cis–trans isomerisation – which in this case describes the orientation around a double bond – can be deduced. The method can be used on any molecule with a polar end group. ‘You can take a molecule, ask an organic chemist to add the right end group, then add some water on the surface and can see what the molecule looks like,’ says Morgenstern.

‘This is a beautiful demonstration of the use of a probe molecule to identify molecular conformations with STM,’ says Geoff Thornton, an expert in single molecule spectroscopy from the London Centre for Nanotechnology and based at University College London. However, he is not entirely convinced by the technique. ‘Determining the molecular structure is always a challenge with STM because it relies on the electronic properties of the molecule. A more precise approach is to use the scanning tunnelling spectroscopy vibrational signature, although this is an even trickier experiment.’