Scientists claim to have seen ‘new state’ of water

What defines a ‘new form’ of a substance? The question is provoked by a study showing the familiar, bent water molecule with its protons delocalised over no fewer than six equivalent positions around a ring, averaging away its dipole moment.1Alexander Kolesnikov of Oak Ridge National Laboratory in Tennessee and colleagues call this a ‘new form of water’. 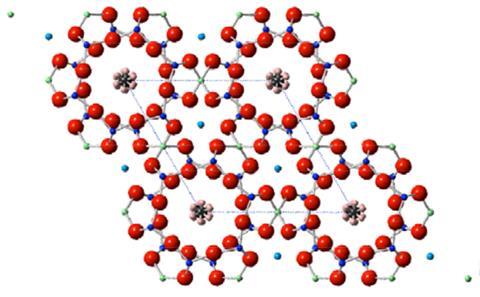 It sounds almost unbelievably odd. But the basic phenomenon reported by Kolesnikov and colleagues has in fact been recognised for decades. They have used neutron scattering to probe water molecules undergoing quantum tunnelling between different orientations while trapped in the molecular-scale channels of a crystal of beryl (Be3Al2Si6O18), which have a hexagonal cross-section. This tunnelling means that the lowest energy state of the molecules under the ultracold conditions of the measurements – around 5K – is a mixture of orientations in the six-fold symmetry of the channel.

This ground state is split into distinct energy levels by the tunnelling transitions, and the researchers see transitions between, revealed as resonant energy peaks in the neutron spectrum, as the neutrons exchange energy with the water molecules. ‘These results indicate that water in beryl at low temperature has an unusual shape, with delocalised protons over six positions,’ Kolesnikov says.

A team in Russia suggested previously that quantum tunnelling might explain the terahertz-frequency spectra of water in beryl’s nanochannels.2 Kolesnikov says that he and his colleagues decided to study the system using neutrons because his co-author Larry Anovitz had large single crystals of beryl to hand. Their earlier study using neutron scattering and dielectric spectroscopy hinted that the reorientation of the water molecules might be hindered by some energy barrier, but the two techniques gave conflicting results.3 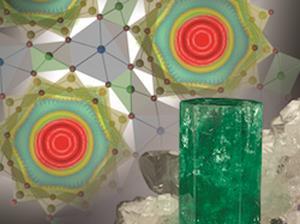 The tunnelling behaviour now becomes apparent by considering the way the neutron spectra change with temperature. Spectral peaks that the researchers identify with tunnelling transitions become weaker as the temperature increases, which is what would be expected for this quantum effect but is opposite to what one should see for ordinary vibrational transitions. At high enough temperatures the water molecule starts to rotate freely, and the quantum tunnelling disappears. Kolesnikov and colleagues say that their ab initio quantum calculations support this interpretation.

Rotational quantum tunnelling of hydrogen atoms in small molecules at low temperatures – in which the molecules in effect tunnel through energy barriers hindering their rotation – has been known since the 1970s, and has been observed previously for molecules such as methane and ammonia using neutron scattering.4 That’s a particularly good technique for studying this effect, because neutrons, unlike electrons, are strongly scattered by hydrogen atoms.

What makes rotational tunnelling unusual in the case Kolesnikov and colleagues have studied is that this particular geometry creates non-equivalent orientations of the molecules within a potential well. In contrast, an ammonia molecule tunnelling through rotational barriers around its three-fold axis of symmetry looks identical in each orientation.

According to the researchers’ quantum simulations, the mixing of the distinct orientations of water within the beryl channels cancels out the dipole moment that it normally possesses due to its ‘V’ shape (there is more electron density on the oxygen atom than on the hydrogen’s). It also results in a shifted centre of mass for the entire molecule.

However, other researchers will probably want to scrutinise these calculations carefully before accepting the claims. And whether this genuinely qualifies as a ‘new phase of water’ seems likely to excite some debate. The molecule is, after all, unchanged, other than switching between several energetically equivalent states. ‘This looks to me like just a realisation of quantum mechanics and not so different from what water will do on this same potential energy surface at higher temperatures when it is classically rotating,’ says Angelos Michaelides of University College London.