What does it take to improve laboratory safety?

With criminal charges brought over the death of a UCLA student, US labs are looking at ways to improve safety

A series of high-profile incidents at US universities, including the death of Sheharbano (Sheri) Sangji at the University of California, Los Angeles (UCLA) in 2008, has prompted close examination of attitudes towards safety in academic chemistry laboratories. 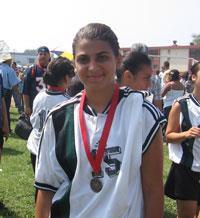 With criminal charges being brought against both the university and Patrick Harran, Sangji’s supervisor, there is hope in the chemistry community that these events will drive a cultural shift towards greater responsibility for lab safety, both across the US and throughout the academic world.

For its own part, UCLA has overhauled its safety practices and has established a center for laboratory safety to develop and disseminate safety training programmes and best practice. In a statement, the university described the criminal charges as ’baffling’, given its cooperation with the authorities and the outcome of various investigations into the incident.

But making laboratories safer is no easy task and requires support at every level within an organisation. This was highlighted by the US Chemical Safety Board (CSB) following its investigation of an explosion at Texas Tech University (TTU), in which a student was seriously injured. The CSB identified deficiencies at several levels of the safety management structure at TTU, which allowed the accident to happen.

’If you take away the final layer - the graduate students - none of those other deficiencies disappear,’ says Cheryl MacKenzie, a CSB investigator who was on the TTU case. The CSB’s investigation identified a lack of oversight and accountability for safety above the level of group leaders and likens research groups to ’fiefdoms’ beholden only to their principal investigator (PI). MacKenzie adds that the investigation took in information gathered about 120 other incidents nationally, which indicated that this situation was far from unique to TTU.

Chris Blackwell, area safety officer for chemistry at the University of Oxford, UK, reinforces the idea of levels of responsibility. ’Each individual has a responsibility to themselves,’ he says, but then group heads are responsible for the work of their students; the head of department must ensure that the group leaders comply with university policy and ultimate responsibility for everyone’s safety lies with the chair of chemistry. 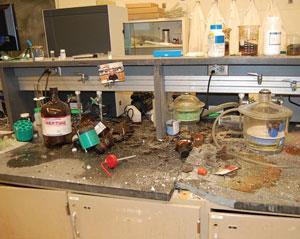 The explosion at Texas Tech University seriously injured a student

Blackwell explains that while he has the authority and backing from the university to shut down laboratories if they are working unsafely, this would normally be a last resort. He conducts unannounced inspections of each lab several times a year and aims to involve lab members in debates about their working practices. ’The students are used to us coming round, and there’s usually a lot of banter,’ he says.

By getting the students onside, particularly senior group members, the power of peer pressure helps reinforce safe practices. ’Changes in culture in some ways filter up from the lab as well as down from the top,’ Blackwell notes.

But for this to happen, the lab members need to understand how to recognise and assess hazards. In the UK this is required under the Control of Substances Hazardous to Health (COSHH) regulations and researchers are trained in the process. Mackenzie highlights that, in the US, there is no legal requirement for researchers to perform a risk assessment before performing an experiment and, while individual universities have their own policies in place, there is no central reference on best practice.

’When you’re a new researcher, or entering a new project, you may not know which questions to ask or realise the danger you’re putting yourself in,’ says Mackenzie. This is where supervisors really come in. A more formalised process, such as that used in industry, might identify the hazards, she adds, but identifying how such a process might work in the dynamic environment of a research lab is less straightforward. To this end, the American Chemical Society has taken up the CSB’s request to develop guidance and resources for universities.

One of the CSB’s primary recommendations for improving safety nationally is to develop a system of reporting and collating all incidents and near-misses. This helps labs monitor their progress and requirements to improve safety and creates a resource to share best practice.

This sharing of experience is extremely beneficial, says David Kinnison from the University of Southampton, UK, who chairs the University Chemical Safety Forum (UCSF). This includes representatives from the majority of UK universities and was set up in 2006 specifically for that purpose. ’We have an email discussion list,’ he says, ’and we meet twice a year. At these meetings we have invited speakers and a closed forum where members can discuss incidents and how they dealt with them.’ The closed nature of these discussions means that incidents can be examined frankly and pragmatically - without fear of repercussions and with a focus on learning and support.

This learning is being consolidated into training resources, produced with support from the UK Heath and Safety Executive and the RSC. Kinnison explains that the initial focus is on energetic materials, in part prompted by an explosion at the University of Liverpool in 2009, but that the intention is to expand it to cover other topics in future.

’I think there is going to be an increase in more formal training on chemical safety in British universities in the next five years,’ he adds. But rather than just explaining the legal side, Kinnison emphasises the importance of teaching the chemical reasons why things explode, or are dangerous. ’Safety comes down to making judgements,’ he says, so researchers need to be equipped with the knowledge and skills to make those judgments.

Serious incidents, such as those at UCLA, TTU and Liverpool, undoubtedly stimulate action in the short term, but to have a long term impact on safety culture will require sustained and coordinated effort from a range of parties. As Blackwell notes: ’A death [like Sangji’s] is bound to have an effect. It sends a shockwave worldwide and hammers home why we have all our procedures in place.’ But at the same time, he points out that persistence is imperative. ’At the risk of sounding boring, you just have to keep on at it.’