What happens when you perturb the system?

David Smith is a professor of chemistry at the University of York in the UK. His research explores how supramolecular chemistry can make molecular-scale building blocks self-assemble into nanostructures. He also has a passion for educational outreach. 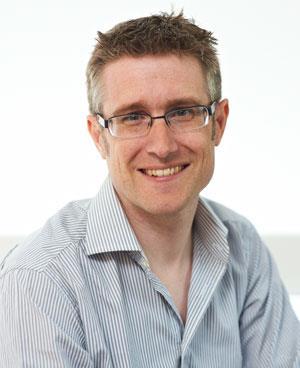 How would you describe your work and approach?

There’s two ways of thinking about what we do I suppose – scientific and application. Scientifically we’ve always been interested in how molecules interact with their surroundings. For me, molecules aren’t interesting until they start to do stuff in their environments…the more complex the environment, the more chaotic it is and the more interesting it gets. That underpins all the research we do really, the idea of complex interactions.

And the applications, you’ve done a lot of work on heparin binders, why heparin?

During surgery they use a lot of heparin because it’s an anticoagulant so it thins the blood and allows them to do the surgery. Then at the end of the surgery they have to remove that heparin because the patient goes back to the ward and they want the patient to recover and clot so that they don’t continue to bleed. To do this the doctors use an antidote called protamine which binds the heparin. It’s a naturally occurring protein but it causes bad side effects in quite a lot of patients – about 10% have some sort of side effect and in 3% it’s quite serious. So we started off thinking about synthesising alternatives to protamine that could be used in the surgical recovery of patients – we are trying to do that by self-assembling a non-toxic nanoscale system which can bind and remove heparin in vivo.

Indeed, much of your research involves molecules that assemble into larger nanoscale soft matter systems and interact with a further target, does that just have drug delivery applications?

You can think about drug delivery, we do that. But it can work alternatively to that – you can imagine a soft material that you build from very simple molecules that assembles into a nanoscale material that then binds to pollutants in the environment you want to remove, or something you want to direct, like the growth of cells. In a way the application is not the only thing that drives us. We have a technological approach to seeing how molecules behave with each other that we want to try and apply across the spectrum.

With such a wide number of applications is your group very interdisciplinary?

Yeah, so the technology’s all the same. We’re using the same basic chemical technologies, syntheses and assay development to probe nanoscale structure and binding. But in terms of the journals the group reads it will span all the way from Soft Matter and Nanoscale to biomolecular journals then through to core chemistry journals, because the applications are diverse. That’s how I like to think of it, the technology is quite focused but the applications are broad.

And that’s obviously what interests you, taking bits from many different areas.

Yeah, like life in general. I have every respect for academics who want to be the total expert in something specific but I don’t want to be that person. I want to have a core technology and then I want to go and play with it. And if I make mistakes going into biology because we don’t know what we’re doing, we find good collaborators, we get good advice, we learn and we hope that our technology, maybe because it hasn’t been used in that area before, is going to be transformative. That’s very much the approach we take.

Did you always have wide ranging interests? What interested you in chemistry?

I guess the reason I’m a chemist is because of good teachers. I had two amazing teachers, one of whom was a real intellectual and gave me a copy of Linus Pauling’s book, The Nature of the Chemical Bond, and really made me think. And the other guy was one of those brilliant teachers who just did demonstrations in every lesson. Between those two they showed me chemistry and why it was interesting. I joined the RSC at the same time, as a student member, and Chemistry in Britain, Chemistry World’spredecessor, sparked my interest. I’d always liked the idea of academia, and I loved teaching but I’d not thought about the research side at the time. Even as an undergraduate I liked the practicals but they didn’t inspire me.

Working with Paul Beer as a PhD student at Oxford was a transformative experience – he was a great boss. I began to better understand supramolecular chemistry and liked the idea of being able to programme a molecule with information to make it do stuff to its surroundings. The molecules began to take on personalities, to me they were almost like people. That kind of feel for chemistry, and it’s quite an intuitive approach to chemistry in some ways, that’s what got me excited about chemistry.

That’s an interesting approach when you think of your continued passion for teaching which is also tied into understanding how different people react to different stimuli.

Absolutely, so you look at what I do on the education side of things and a lot of it is, how do you break down interactions between people? How do you get new modes for making people communicate? All of my teaching has been to do with engaging wide audiences so I spend a lot of time talking to 16–18 year olds in a very traditional lecture format, and every year I end up speaking to several thousand A-level students about chemistry. And then I thought, what are the limitations of that? And the limitations are that the students have to come to the event. The school has to sign them up. My interactions are being controlled by something external. So I began to think how can I communicate more openly across those borders, how can I interact better, and so I started using YouTube.

I began making videos about a whole range of different chemical topics…I’d originally started to do some of those videos for my students at York, because some of it was just revision material for them, and then I realised that people around the world were engaging with them.  Also I realised that if I had quite a lot of fun making videos, my students might also have quite a lot of fun doing it. So there’s a project, we call iTube, YouTube, WeTube, ChemTube, where students can make videos as part of their assessment for one of my modules in polymer chemistry. We’ve had around 100 YouTube videos made by York chemistry students now, freely accessible for anyone to see, and they’ve had tens of thousands of hits between them.