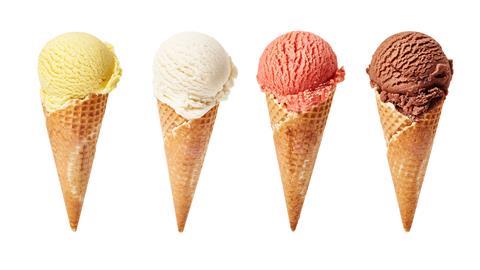 All right, stop, collaborate and listen: ice cream’s back with a new explanation

What is ice cream?

Frozen cream, right? Wrong. In fact, the definition of what counts as ice cream varies around the world, with some mandating a certain amount of cream, while others using it as a catch-all term for treats including sorbet and frozen custard. Whatever you call it, we eat a lot: by retail value, global ice cream sales weighted in at $50 billion (£38 billion) in 2014. That year, China overtook the US in terms of retail volume, scooping out 5862 million litres. Low fat and fat free and gluten free options are on the rise, and there’s an increasing appetite for artisanal ice creams, especially in North America and Europe.

What about the chemistry?

While ingredients can vary, the chemistry is not up for debate. The perfect summer treat is a partially frozen foam, mostly made up of tiny bits of ice and air bubbles. It is also an emulsion of fat droplets spread through a mixture of water, sugar and ice. Air bubbles are trapped by fat globules, which add texture and firmness. A typical scoop of vanilla ice cream will contain 30% ice, 5% fat, 15% sugar solution and 50% air.

Why is sugar important?

Sucrose and fructose deliver sweetness but also depress the freezing point of ice cream. This allows ice cream to be scooped from serving tubs, typically at −16°C. A phenomenon called Raoult’s law means that only half as much fructose as sucrose is needed. However, getting this balance is tricky should you decide to add alcohol, which is a potent softener of ice cream. And if you’re surprised by how high the sugar content happens to be, remember: cold temperatures mute flavours from our taste buds, disguising just what’s contained in our food.

How should a quality ice cream feel and taste?

Smooth and creamy, with no grittiness from ice crystals: the human tongue can taste the crystals if they exceed 45µm. Quality ice creams also have more real ingredients and less added artificial flavours – so that melon tastes like melon. Unsurprisingly, cream should be used as the fat source, with condensed milk or milk powder as the protein. Quality ice cream products typically have less air and more fat (up to 15%). Premium ice creams also ensure they have evenly dispersed additions such as fruit pieces, cookie dough or chocolate chips. Recent innovations mean that the newest ice cream freezing equipment produces extremely small ice crystals and air bubbles, resulting in better quality ice cream than ever before.

Italian gelato also enjoys a reputation for being the best ice cream money can buy – that’s because it uses rich, dense ingredients with a high milk and cream content. Typically, gelato is lower in fat and higher in sugar and served soon after freezing.

What marks out economy ice cream?

Air, which can make up over half an economy tub (so one litre might actually weigh 520g). While this does mean there are fewer calories, the high air also makes the treat melt more quickly. Cheaper ice creams usually substitute dairy contents with a vegetable oil, such as palm oil, and sucrose can be swapped out for glucose–fructose syrup. Economy ice creams also have less total solids, so more water, than their up-market rivals.

What about soft ice cream?

Soft ice cream, such as cones you might buy from vans, is made from a liquid vanilla mix sold in 20 litre batches. This is frozen in a soft serve machine, which whips in air and freezes some of the water, before it is extruded at around −6°C in a soft state. It’s easy to tell the quality, though: adding air allows ice cream to better reflect the range of visible light that gives it its colour – the whiter the ice cream, the better the quality.

Is it possible to make ice cream at home?

Yes, with the right equipment. Homemade ice cream units whip up a foam to aerate and freeze at the same time, but not fast enough to generate microcrystals. A homemade kit will take 10 to 15 minutes, compared with a minute in industrial machines. Alternatively, if you’ve got liquid nitrogen to hand and know what you’re doing, it will freeze ice cream almost instantly. Generally, homemade ice cream tastes great eaten fresh, but tends to harden in the freezer.

Can I store ice cream without losing quality?

Once it is stored below −25°C, ice cream can keep for months with no loss of quality if stabilisers are added. When ice cream warms even fractionally, ice melts and water refreezes onto larger crystals and escapes onto the surface. Stabilisers, such as locust bean gum (which doesn’t contain locusts!), guar gum and aliginate help trap moisture and resist water recrystalisation. Premium ice creams use egg as a stabiliser, which gives a rich feel and flavour, but it’s not as robust as gum-based stabilisers once temperatures fluctuate. Of course, the quicker ice cream is eaten, the less need for additives and stabilisers – which makes a great excuse for eating as much of it as you want.

The author would like to thank Douglas Goff at the University of Guelph, Canada, and David Waldron, University College Cork, Ireland for useful discussions.