What's in a pill?

Buying cheap drugs over the internet is well known to be a risky business. But the sinister menace of the ’falsified’ active pharmaceutical ingredient (API) gets far less publicity. By definition, these are APIs that are not from the approved, labelled source and therefore could contain toxic impurities.

According to Guy Villax, chief executive of Hovione and board member of the European Fine Chemicals Group (EFCG), falsified APIs are an ’invisible danger’ to millions of people around the world, with a single batch of API having the potential to reach up to a million patients.

Speaking at the Conference on Pharmaceutical Ingredients (CPhI) in Madrid, Spain, Villax said that Philippe Andr?, an industry auditor and associate professor at Tianjin University, China, believes that 20-30 per cent of off-patent medicines in EU pharmacies could contain falsified APIs.

But Julie Mar?chal, senior manager of regulatory affairs at the European Generic Medicines Association (EGA), questions how this figure was arrived at and says there are official studies that cast doubt on these accusations. She stresses that ’legally [generic medicines manufacturers] have the responsibility to source ingredients from companies that have been qualified and audited by ourselves and found to be compliant.’

’And data regularly collected by the French government agency Afssaps has shown that tests on random samples of medicinal products and active substances used on the French market show that there is no significant difference between materials originating outside of the EU compared with those made inside,’ says Mar?chal.

There is no question that generic medicines have become vital in enabling governments and insurers to provide healthcare by stimulating competition with the original drug makers once patents have expired. But the fierce pricing war within the generic drug industry has led to profit margins being squeezed. This has led many manufacturers to outsource the production of APIs to companies in India and China where labour costs are lower.

The EFCG has estimated that around 80 per cent of all medicines sold in the EU now contain APIs sourced from India or China due to the cost benefits. But one of the hazards of buying ingredients from abroad is that it is more difficult to inspect an increasingly long and convoluted supply chain. 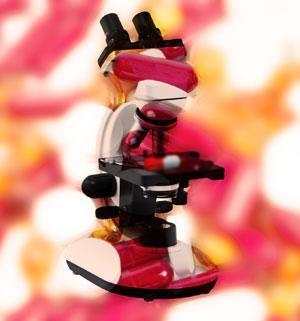 Generic drugs under the microscope

Even though regulators do certify good manufacturing practice (GMP) abroad, the quantity of substandard APIs is believed to still be increasing. Over the past 10 years, the European Directorate for the Quality of Medicines and Healthcare (EDQM) has inspected around 160 API manufacturing facilities and, as a result, more than 50 certificates of suitability have been suspended or withdrawn from manufacturers in India and China.

But even if the audits fail, Mar?chal believes that in-house checks should catch any rogue batches, ’we test every batch upon receipt, at least for identification and depending on the supplier, for quality control purposes. Then, before we use APIs, we conduct full retesting, including impurity testing to existing pharmacopoeia standards.’

’The materials then go through in-process testing and final product testing - so saying that the released medicine on the market is falsified means all these checkpoints have failed, which is unlikely,’ she says.

But the question of where rogue APIs come from remains.According to Villax, data supplied by EDQM inspectors suggests there has been an increase in ’facade’ constructions, where a company that has GMP certification from a regulator like the US Food and Drug Administration also supplies APIs from other manufacturers that have not been certified. Fa?ade facilities relabelling APIs made by unlicensed manufacturers has become ’a classic process in China’, says Villax.

The question of how to deal with the problem still remains, but Villax was keen to stress that more stringent penalties are needed. He pointed out that in most of the world, punishment for counterfeiting medicines is no more severe than for patent infringement. France, Germany, the US and the Philippines have all passed legislation making the counterfeiting of medicines a serious crime, but a Europe-wide approach is yet to be agreed by the lawmakers.

Conscientious makers of generic medicines are also taking matters into their own hands, auditing their suppliers more often and building more direct links with API manufacturers. According to Gilles Cottier, president of Sigma-Aldrich Fine Chemicals (SAFC), the issue of pharmaceutical supply chain integrity is drawing some manufacturers back to using European suppliers.

’We work hard to secure our supply chain and make more than two thirds of what we sell ourselves - our customers need to know who the supplier of their supplier is, and we are very transparent with our customers,’ says Cottier. ’We are seeing increasing interest from customers that might have used suppliers from emerging markets    but are now coming back to Western suppliers like SAFC.

As usual, the motivation behind counterfeiting is money, and with the ever increasing demand for pharmaceuticals, Villax issues a stark warning for the future - the fraudulent API market, he says, is now ’more profitable than making heroin’.