Whipping oils into a frenzy

Inspired by foams in everyday products such as food, researchers in the UK have developed a way to form extremely stable temperature-sensitive air-in-oil foams. 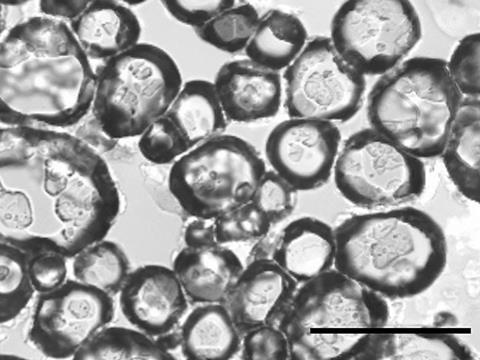 These air bubbles in sunflower oil are coated with solid tetradecanoic acid crystals, keeping the foam stable for months

Air-in-oil foams are widely used in industry, and feature regularly in everyday life. A typical example is aerated chocolate, formed from molten cocoa butter. Not only does the light texture provide a pleasant sensation in the mouth, but introducing air into products allows companies to manufacture foods with a lower fat content for less money. Oil foaming is also responsible for the phenomenon that cuts off the pump when refuelling vehicles. Despite this familiarity with air-in-oil foams, information on the science behind them is still lacking.

It was this scant understanding that drove Bernie Binks and co-workers at the University of Hull to establish a new method for stabilising air bubbles in oil. Binks started with a surfactant solution in hot oil, and then cooled the mixture. This caused the surfactants to crystallise, resulting in small platelet-like crystals dispersed in oil. By introducing air, Binks found that it was possible to foam the oil and form air bubbles coated with the crystals.

The key point in Binks’ work is the foam’s long lifetime. Many existing air-in-oil foams are stabilised by surfactant molecules, which can easily desorb from the air–oil interface. In contrast, the solid crystals used in this work effectively plate the bubbles with armour; the crystals cannot easily desorb from the interface, and instead the bubbles bounce off each other and do not coalesce, resulting in foams that can remain stable for up to 18 months.

Interestingly, Binks notes that ‘when we warm the foam, we reach a temperature close to the melting point of the crystals, and then they melt, they become molecules again, the bubbles coalesce, and we end up destroying the foam.’ By changing the oil used, it is also possible to vary the temperature at which these so-called ‘smart foams’ collapse. Upon cooling the mixture, the crystals form once more, and the foam can be regenerated.

Brian Saunders, a polymer and colloid chemist from the University of Manchester, UK, sees the research as ‘an important study, which nicely demonstrates a simple and versatile method for preparing reversible, temperature-responsive, oil-based foams.’ He adds that ‘the work should have impact for a range of industries interested in foams, such as the food industry.’

To gain even more control over the air-in-oil foams, Binks hopes to use various different surfactants to tune the collapse temperature of the foams. Of particular interest is mouth temperature, given the significant applications for the food industry.