Scientists in the UK and Finland have shown that white phosphorus, a highly reactive and potentially toxic form of the element, can be stabilised in air indefinitely when imprisoned inside a self-assembling molecular cage. The discovery could allow for safer storage of the material and other hazardous substances and potentially may be useful for soaking up harmful chemicals in the environment, say the researchers.

Last year, a team led by Jonathan Nitschke at the University of Cambridge, UK, developed a molecular cage from iron ions held together by organic linkers, and demonstrated it could encapsulate small hydrophobic molecules. Now, Nitschke and colleagues have discovered that white phosphorus molecules, which are hydrophobic, neatly match the size and shape of the cage’s cavity. Interestingly, the contained phosphorus does not spontaneously combust in air as it would under normal conditions. What’s more, the phosphorus is not permanently trapped but can be released by flooding it out with benzene.

’It was a bit of a leap of faith to try phosphorus and it just worked,’ says Nitschke. ’Phosphorus has been known to be a very nasty customer for many hundreds of years and so we’ve caged this ancient demon in a way that its behaviour is fundamentally changed,’ he adds. 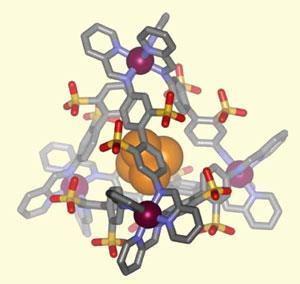 Similar container molecules have been developed previously and the chemistry involved is relatively simple, explains Mike Ward, who works on container molecules at the University of Sheffield. ’But it would never have occurred to me to react one of these container molecules with phosphorus,’ he says. ’I thought it would eat it for breakfast but all that happens is that the phosphorus molecule obediently sits inside the cage and becomes completely stable. So having the idea was very, very clever.’

The molecular cage self-assembles in water from simple organic subcomponents and iron(II) ions. Because both the cage and phosphorous molecules are tetrahedral (pyramidal) in shape and of similar size they compliment each other almost perfectly. The phosphorus is stabilised because when it usually reacts with oxygen it gains volume. ’But there is not enough space inside the cage for it to oxidise so it is constricted within the space of the cage,’ says Nitschke.

Apart from demonstrating the proof of principal that such a volatile molecule can be stabilised indefinitely and reversibly, the team suggest their work could have potential environmental applications. ’It may be a way to get rid of phosphorus where you don’t want it, such as left over phosphorus in a warzone,’ suggests Nitschke.

However, Ward is doubtful that this will be useful for large scale environmental problems. ’If it’s an environmental issue you’re not talking milligrams here, you’re talking tonnes,’ says Ward. ’I doubt that it’s going to have a bulk application on an environmental scale because the molecule involved would be too expensive and difficult to synthesise on that scale.’

But co-author of the paper Kari Rissanen from the University of Jyvaskyla, Finland, holds hope for an environmental application. ’Maybe in the future it will be possible. What we postulated is that it might be possible with this kind of idea but of course in this case the container molecule is too small for bigger business.’

Ward is, however, optimistic that this kind of chemistry may enable highly selective drug targeting. ’You’d only need a few milligrams so that’s an entirely feasible future development,’ he adds.