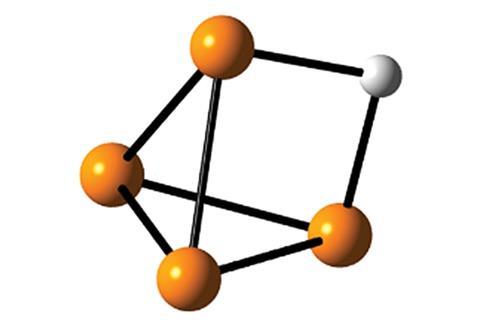 A team from Germany has made protonated white phosphorus in solution using a Brønsted superacid, and experimentally confirmed that the weakly bonded hydrogen of [P4H]+ sits on the edge of the P4-tetrahedron.1

White phosphorus (P4) is the easiest form of phosophorus to make on an industrial scale and is used to form organophosphorus compounds, which are commonly used as pesticides. However, it is also very reactive and unstable at room temperature, and scientists still do not fully understand its chemical reactivity towards electrophiles, even H+. Theoretical studies on the protonation of P4 have variably predicted that protonation happens either at the apex of the P4-tetrahedron or on the edge of the tetrahedron, forming a P–H–P. But, until now, scientists have not experimentally shown what protonation of P4 would look like. 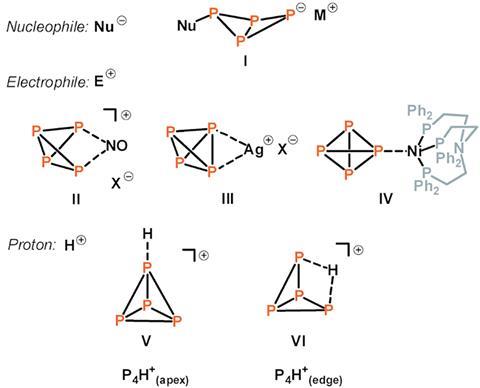 Now, Christian Müller, Sebastian Riedel and their team at the Free University of Berlin believe they have solved this debate. Using an aluminium-based superacid system previously reported by one of the group,2 they synthesised [P4H]+ in solution and investigated its structure using spectroscopic methods. They compared their results from those predicted using quantum-chemical calculations, and found that protonation on the edge of the tetrahedron has the lowest energy. To accommodate the H+ ion, the P4 tetrahedron opens along one of the edges to form a three-centre-two-electron P–H–P bond. The team believe that their results will help scientists understand the reactivity of white phosphorus so they can develop chemical processes relating to the functionalisation and activation of elemental phosphorus by other electrophiles.