A tiny remote-controlled four-wheel drive electric vehicle has been made by chemists in the Netherlands. The single molecule car’s ’wheels’ can be made to turn in response to tiny electrical pulses, propelling it across a surface.

Making nanoscale machines that can move around, carry loads and construct objects from the bottom up is a long-held goal of nanotechnology - aiming to mimic the action of nature’s molecular robots. But as Ben Feringa from the University of Groningen, who led the team, explains, controlling a molecular vehicle is very different to driving a car. ’There is no effect of gravity or weight to keep it on the road - you’re working with conformational changes and interactions with the surface,’ he says. ’If you’re not careful the molecules will just fly around all over.’ 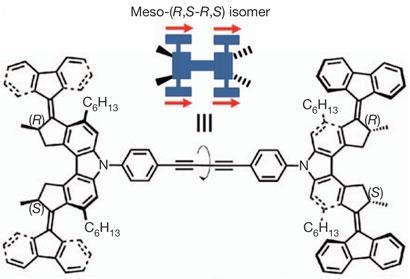 The molecular vehicle has four paddlewheel rotors that double as wheels

Several groups have made nanoscale cars or walkers, but these have generally either moved by diffusion, been pushed by a microscope tip or had some kind of programmed track to walk along. Feringa’s vehicles move specifically in response to tiny electrical pulses from a scanning tunnelling microscope tip, giving precise control over the motion of individual molecules.

The ’wheels’ of the vehicle are made from versions of the molecular rotors that Feringa’s group has been developing for several years. They look like small paddlewheels and have a central C=C double bond as the axle. The rotation comes from isomerisation of this double bond and helix inversion as the paddle moves past groups on the chassis of the vehicle. 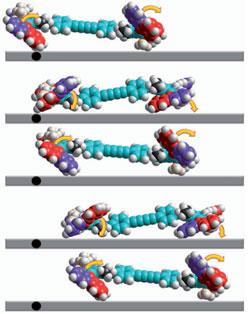 One of the biggest challenges, Feringa says, is to get all four wheels to move together in the same direction. ’Nature doesn’t use a single motor,’ he adds, ’it uses many motors in concert, for example in muscles.’ Each wheel rotor only turns one way, and they are prepared as mixtures, so only some of the vehicles have the right combination to move forward. Others will spin around, and some will not move at all. And while the electrical pulse excites the whole molecule, all four wheels don’t necessarily move with every pulse, so the nanocar’s handling is a little unpredictable.

James Tour from Rice University in Houston, US, whose team has produced a variety of nanocars in the past, is very excited - particularly by the way the team managed to get the rotors working in concert. ’To even get these molecules isolated on the surface in the right orientation is not easy,’ he says, ’but then to image them clearly and do the excitations - each of those is an order of magnitude increase in difficulty. It’s remarkable and really beautiful work.’

Feringa is working on different designs of vehicle using the team’s extensive experience of different rotor designs. ’This is just our first primitive step,’ he says. The next versions could be driven by light, or have bigger wheels, or be more precisely controlled in their motion. The team has already demonstrated rotors that can switch their rotation direction or apply a ’brake’ to stop completely, but Feringa is modest about the prospects, emphasising the difficulty of working at the nanoscale.

For Tour, the impact of the work is more than simply scientific curiosity. ’It takes things that were large hurdles and pushes them down so that other people can enter the field,’ he says. ’It has stimulated us to think about new ways we can get our molecules to move.’