An artful solution to scientist shortfall

There has been much attention given recently to concerns regarding the overproduction of science graduates. An American Chemical Society panel recommended that graduate education in chemistry needs to be overhauled so as to avoid a possible glut of chemistry doctorates, and the economist Paula Stephan suggested that academic research is a pyramid scheme with too many scientists being trained for increasingly limited employment opportunities. 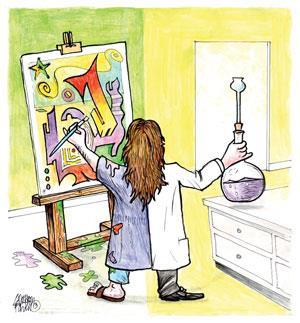 How times have changed. These bleak prospects stand in stark contrast to the anxieties of the UK government’s Advisory Council for Scientific Policy 60 years ago. Manpower problems were urgently important in the decade after the end of the second world war, and the demand for scientists and technologists was considered so great in 1952 that there was no prospect of supply exceeding demand before 1957 at the earliest. In particular, chemists, chemical engineers, mechanical engineers and physicists were in short supply. At that time, only 3% of the age group would enter university education and there were only 18 universities in the country. There was also marked anxiety at the continuing decline in both the number and quality of science teachers in schools – at that time one in four science teachers had no recognised qualification for the task.

Enquiries by the government implied that the number of scientists and engineers who would be needed for the manufacturing industry in 1959 would be 41% greater than in 1956 and the annual number of graduates in science and engineering would have to increase by 70% in 10 years to 1966. By the end of the 1960s, universities would have to turn out 50% more graduates in the basic sciences and 150% more engineering graduates than in 1956. The council later commented that these conclusions received very little attention in the press.

In response to these concerns, the chairman of the council, Alexander Todd, who was later to win a Nobel prize in chemistry and serve as president of both the Royal Society and the RSC, asked a somewhat unconventional question: ‘What steps should be taken to divert to the study of science, some of the … people who are now studying arts subjects?’ Although the minutes of the council do not report any subsequent discussion of this remark, an initiative to do just that emerged shortly afterward – the transfer bursary scheme, funded by Imperial Chemical Industries (ICI).

Would-be arts and humanities students arriving at the University of Cambridge in 1956 were offered a bursary to enrol instead in a science programme. It was someone’s dream (perhaps Todd’s) that this scheme might eventually operate at four other universities, including Edinburgh, Imperial College and Oxford, but none has any record of this and the scheme was only continued at Cambridge until 1958. ICI records of the scheme were destroyed when AkzoNobel acquired the company in 2008. Ultimately, the scheme was deemed ‘not a success’ but the reasons for this remain unknown.

Of the 13 people who started in the scheme in October 1957, two were would-be classicists, three historians and seven linguists. After a one-year course of maths, physics and chemistry, three went on to graduate in engineering and four graduated in natural sciences; the others reverted to their original intention or moved to graduate in economics. Since then, the members of the group have achieved distinction in the theatre, medicine, information technology, publishing, academia and in management, both in the chemical industry and in industrial relations. The scheme’s ‘success’ is clearly subjective.

Following the Robbins report in 1963, much has changed in higher education, so that we now have more than 40% of the age group attending more than 130 universities and colleges. But despite current concerns of a scientist glut and the ‘failure’ of the transfer scheme, there may yet be some benefit to be gained from a similar exercise today. In 1954, the council was very critical of the trend to early specialisation in schools, which is as strong or stronger today. The transfer scheme reflected an opinion that the decision between ‘arts’ and ‘sciences’ need not be made so early, and could be delayed even into university, as happens elsewhere. Similar projects or policies now could perhaps be more effective in producing scientists and technologists, and enabling a greater mobility and flexibility in education and the workforce. Have I ever regretted making the transfer? Not for one moment.

Joe Connor is an emeritus professor at the University of Kent, UK