Robots will increasingly work alongside humans to solve complex problems

Will a robot take over my job some day? It’s a question that comes up time and again, and has different answers for different jobs. Routine factory work is clearly more threatened than roles involving significant creativity, but for how long? Perhaps it would be better to ask how we can work with the robots to do our jobs better. 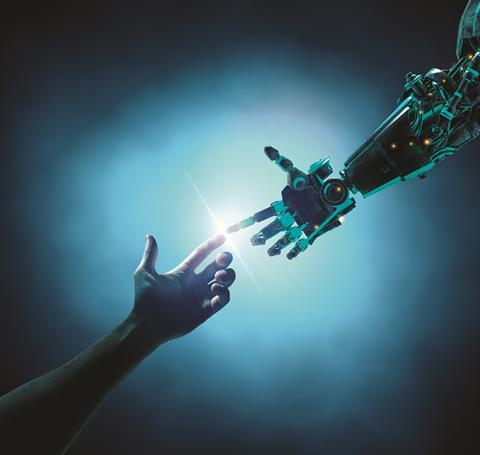 Advances in machine learning and artificial intelligence, coupled with robotic reactionware, are transforming our ability to explore chemical spaces – both in terms of building molecules and discovering or optimising reactions. With increased capacity for automated experiments, and less reliance on intrinsic biases, algorithms can extend and complement human intuition. In several areas, the robots are already edging ahead of humans in predictive power.

Of course, machines have their limitations, too. Producing a result that no sane, trained chemist would have thought of might be an amazing breakthrough, but equally it might just be garbage. The key to success is making best use of both humans and machines. That’s why I was interested to see Chemistry World Entrepreneur of the year Andrew Hopkins talking about ‘intelligence amplification’ as well as artificial intelligence.

Drug discovery is extremely complex. And most of our attempts fail. Naturally there is no way a single person can have a complete intuitive understanding of a molecule’s interactions with every protein in the human body (both target and off-target), as well as its physicochemical behaviour, ease of manufacturing and the freedom of the intellectual property space around the structure. The process also generates vast amounts of data that can be used to train computational aids. It makes sense, then, to combine algorithms and robots with human intuition and experience to enhance the drug discovery process.

This has clearly been going on in various ways for as long as computers have existed, but it feels like we’re getting to the point where the machines are becoming more reliable and having more significant impact. And when it comes to drug discovery, we humans need all the help we can get. Shortening development times by reducing the number of molecules that chemists need to make and test is a great start, but the true revolution will come when the robots can predict clinical success. Let’s hope that happens sooner rather than later.