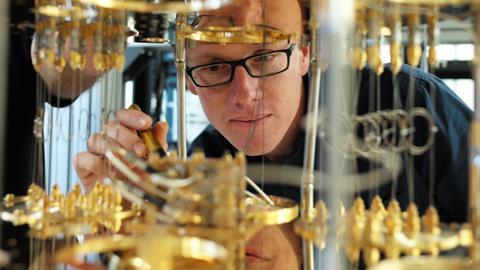 Though not more powerful than a regular laptop yet, quantum computing could one day soon change chemistry

IBM will roll out its first commercial quantum computer later this year. The 5 quantum bit – or qubit – system called IBM Q will be available as a cloud-based service that people can access over the internet for a fee. Though currently in its infancy, quantum computing might one day allow scientists to simulate dynamic biochemical interactions with unprecedented accuracy – a development that could speed up drug discovery.

IBM’s system is, however, far from a tabletop appliance. Its superconducting qubits – the basic unit of computing known as binary digit or bit in classical computers – need temperatures of 20mK, lower than the temperature between the stars. The computer is housed in a multistage refrigerator with two cooling loops containing different helium isotopes.

Although the system is made out of millions of atoms, it behaves like a single quantum atom

Unlike classical bits, which can only be in two states, 0 or 1, the number of states a qubit can occupy is unlimited. In behaviour typical to quantum objects such as atoms, each qubit can assume superposition states, in which it is 0 and 1 at the same time. This means the information density in quantum systems is higher, which would make them able to perform many more calculations per second than conventional computers. IBM’s quantum computer, for example, has only five qubits, but is already about as powerful as a modern laptop that is based on about 10 times as many classical bits.

‘Quantum mechanics is one of the most successful theories in physics to describe nature, especially at its microscopic scale,’ explains Andreas Fuhrer, a quantum physicist at IBM’s research laboratories in Zurich, Switzerland. The easiest way to simulate natural systems would therefore be a quantum computer – an idea proposed several decades ago by physics Nobel prize winner Richard Feynman.

Although classical computers become more powerful every year, complex simulations like those of dynamic biological systems are, and might always be, out of reach – even for supercomputers. Describing molecules – for example their orbitals or their interactions with other molecules – becomes impossible for scientists to do accurately for anything larger than a handful of atoms at a time. Scientists need to apply heavy approximations in their simulations: only ‘a small part is described quantum mechanically and the rest is described with a highly approximated theory like classical mechanics – molecules become balls and sticks bound together by springs’, explains Ivano Tavernelli, a biochemist and theoretical physicist at IBM Zurich.

IBM’s qubits are made from superconducting oscillators, which can be programmed with microwave pulses. ‘This is a way to create an artificial atom using a fully controllable macroscopic device,’ explains Tavernelli. ‘Although the system is made out of millions of atoms, it behaves like a single quantum atom.’

Marco De Vivo, who runs the molecular modelling and drug discovery lab at the Italian Institute of Technology in Genoa, carries out computer-aided molecular docking studies. These predict how a potential drug molecule binds to a biological target, for example a protein. De Vivo’s team performs docking studies on millions of compounds, but ‘the picture we get is static’, he says. ‘In nature, proteins aren’t static, they move according to the laws of physics.’ Molecular dynamics can look at these systems in motion, but probing them using quantum mechanical models is currently impossible.

Google and several university labs have previously built primitive quantum computers but IBM will be the first company to focus on how people use the system. In early 2016, IBM unveiled a freely accessible online service, the Quantum Experience. Intended as a training tool, it allowed IBM to gather data on usage and find out how it could be improved.

Since its introduction, ‘40,000 users have already been experimenting with the Quantum Experience for research into quantum systems, but not yet for simulations of any chemical systems’, says Fuhrer. ‘For this we will have to wait for future updates beyond the current 5 qubits,’ he adds. Currently, the Quantum Experience and IBM Q are not more powerful than a regular laptop. 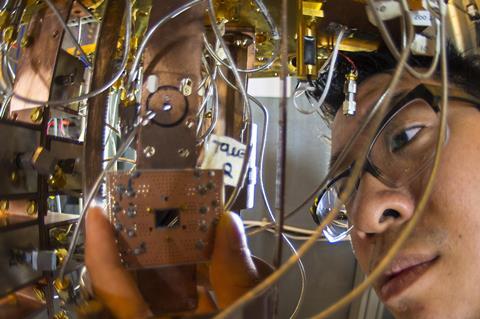 Though IBM has not yet announced the exact launch date of IBM Q, or how much it will cost to access the system, it is clear that the 5 qubit computer won’t be powerful enough for any simulations yet. Nevertheless, ‘having this first quantum computing system available will push the community to develop algorithms and software, and move into a promising direction’, says De Vivo. Accurate molecular simulations on quantum computers could not only speed up the drug discovery process but also lower costs, De Vivo thinks.

It is likely that within the next 10 years, quantum computers with 50 qubits will become available. Their computing power will rival that of the most advanced classical supercomputers but even more advanced systems might be needed to simulate complete biological system on a quantum level.