Robotic system can autonomously carry out and analyse chemical reactions

Able to combine chemical handling and in-line spectroscopy with real-time feedback and analysis, the University of Glasgow’s new ‘robotic chemist’ turns conventional chemistry on its head. Instead of the pre-planned synthesis of a chosen compound, it aims to generate a range of products that are chemically complex and diverse – all without prior ‘knowledge’ of chemistry.

Lee Cronin, whose group developed the robot, says that the aim of the project was to ‘make a robot that follows the reaction rather than the molecule’, adding that if the model was applied more extensively, it may be possible to ‘not only find new molecules, but new reactivity and new sequences of reactions’. 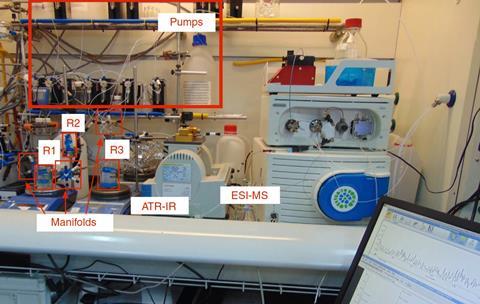 Physically, the robot is composed of a series of syringe pumps, reactor manifolds and two in-line analytic instruments – an IR spectrometer and a mass spectrometer – which are all connected through specially designed software. Once switched on and provided with reagents, it can begin screening for reactivity based on a series of incremental steps. Beginning with four potential reagents, each one is tested by shunting it through three reaction manifolds. After each reaction, an IR spectrum is taken and compared to the spectrum of the initial substrate. This comparison determines a ‘reaction selection value’ (RSI). Once all of the potential combinations have been tested, the pairing with the highest RSI value is selected to move on to the next step where the process is repeated.

Cronin and colleagues demonstrated the system using the core molecule 1,3-cyclopentadiene. This was chosen specifically for its ability to undergo three main steps: the Diels-Alder reaction, reductive amination and amide formation. These reactions were chosen due to their increasing complexity – each step provided an increased challenge for the algorithm and served to demonstrate the potential of aiming for reactivity instead of pursuing the more conventional goal of searching for specific molecular identities. 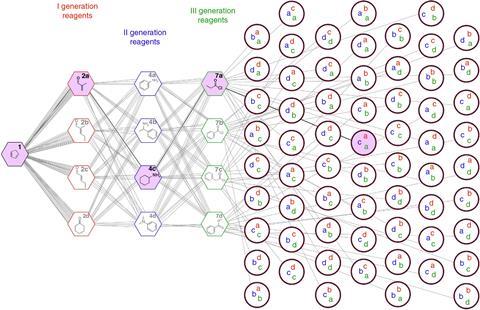 In order to fully assess the reactivity of the pathways, the robotic chemist conducted the series of experiments under three different reaction temperatures and residence times. In all cases, it was found that the system produced accurate and reliable results concerning the selection of the most reactive pathway. This confirmation of the accuracy enabled further investigation into the potential of the robotic chemist to carry out increasingly complex reactions. ‘This is one of my first experiments to explore chemical space and look for complexity when there is no programming,’ says Cronin. ‘It seems to me that if you bring together reagents and follow the reactivity, you might get somewhere really interesting.’

‘There’s a lot of commercial drive to integrate this type of automatic synthesis with drug design,’ comments Ross King from the University of Manchester, UK, who has also developed a robot scientist to carry out reactions autonomously. ‘There are several things driving the improvement’, he adds, such as ongoing developments in the available hardware and software for both chemistry and computer science. Cronin is similarly optimistic about the future of this technology: for him, the only limitations are ‘the practical liquid and material handling, and also the bias of the chemist.’