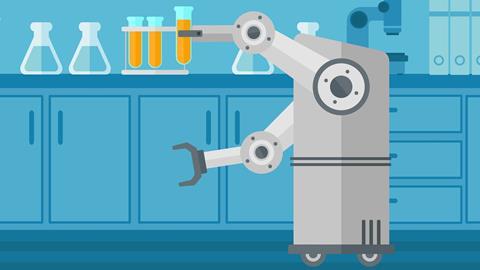 A robot chemist has been shown to be more efficient than its human counterparts – at least when it comes to discovering and crystallising gigantic self-assembling molecules. While these synthetic scientists aren’t about to replace the real thing any time soon, they could help humans to tackle their own blind spots and biases when it comes to research.

A team led by Lee Cronin at the University of Glasgow created a sophisticated algorithm connected to a liquid handling system able to conduct crystallisation experiments on giant polyoxometalates. The robot was then pitted against Cronin’s team with both given the starting materials, an experimental protocol for the synthesis and crystallisation process, and an initial data set detailing previous successful and failed crystallisation attempts. Using this, they were then required to establish their own experimental conditions and procedures in order to analyse the maximum amount of chemical space. 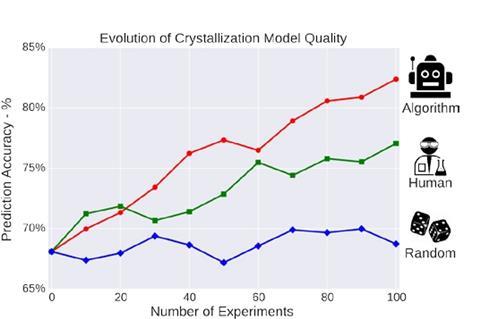 The robot rapidly improved its predictive performance to beat humans

‘The formation of new clusters is serendipitous, and the crystallisation process is serendipitous – it’s a random process – and we wanted to use a robot to see if we could explore those two processes together more efficiently,’ explains Cronin. ‘The results were quite striking.’

‘The fact that the robot was more efficient at searching the crystallisation space was unexpected because we thought that robots would be more boring,’ says Cronin. ‘It’s a curious result, but not unexpected because the robot has less constraints than a human being in terms of liquid handling.’ By virtue of nature, humans are less inclined to perform ‘jumps’ through chemical space. Instead, trained chemists often work methodically and incrementally, making decisions based on the individual’s prior knowledge and training. According to Cronin, this is where we may be limited. 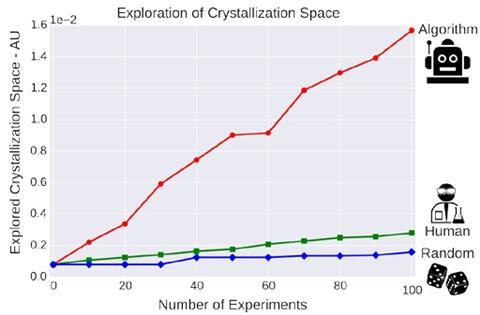 ‘The robot extends the intuition of the human,’ says Cronin. ‘The robot frees the human from bias because it has more time to do reactions that a human wouldn’t otherwise choose to do. If you’re given a random set of reactions, you use your bias – or your training – to choose those reactions.’

‘I think these algorithmic search methods are definitely powerful,’ says Andy Cooper, an expert in materials innovation at the University of Liverpool. ‘The problem with these approaches is that they are strong in certain areas, but we don’t have the hardware or the measurement technology to attack some problems in other domains, such as multi-step organic synthesis.’

It is clear that there is potential for robotic chemistry to take an ever-larger role within the exploration of chemical space but, according to Cooper, the path will not be straightforward. ‘There’s a fairly big technical challenge in terms of interfacing these types of techniques with other measurements. This will be the rate determining step.’