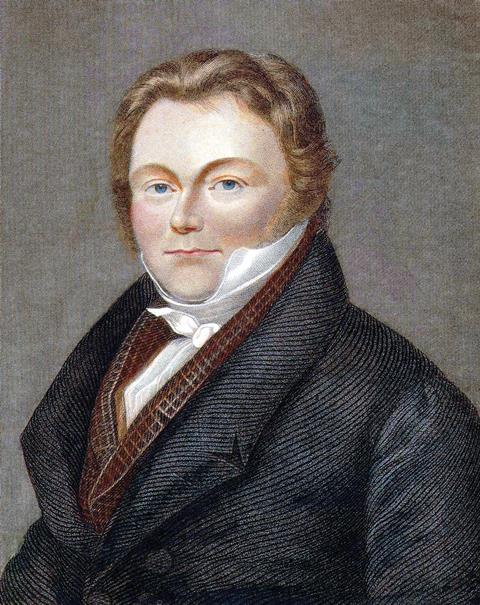 Swedish chemist considered one of the founders of modern chemistry

Several years ago an old family friend in Italy sent me a four-volume set of Jöns Jakob Berzelius’ Textbook of Chemistry that she had recently inherited from her brother with a card saying ‘Only you can truly appreciate these’. Utterly delighted, I didn’t give the note much thought, but instead dived into the books, delighting in the tables of densities and giggling at observations of the tastes of different salts (‘the sulphate of yttria tastes like sugar’).

Berzelius is one of the towering figures of 19th century chemistry, a man who helped to solidify Antoine Lavoisier’s vision of the elements and who worked to systematise chemistry at all levels, not least by trying to rationalise measurement, inventing nomenclature and developing and codifying glassware. His childhood was not easy. His father, a schoolteacher, died when he was four and his mother died a few years later. Berzelius seems to have dealt with his loneliness by exploring the nearby forests. This continued in secondary school where, with the support of an enthusiastic teacher, he built up a big collection of insects and birds. Idyllic though this sounds, money was short and he worked as tutor-farmhand to support himself.

He eventually went to university, in Uppsala, Sweden. Berzelius chose to study medicine, which would guarantee him an income but also keep him close to natural history. His penury meant that he could not take the course in chemistry given by Anders Gustav Ekeberg, the discoverer of tantalum: ‘I had to forsake that for which I could not pay.’

This did not stop him from teaching himself chemistry. He set up a lab at home and successfully repeated Carl Wilhelm Scheele’s preparation of oxygen, delighting in the flame on his splint. He made (and inhaled) nitrous oxide, became a master of the blowpipe and built a Voltaic pile of 60 zinc and copper discs. Fortuitously, in the summer of 1799 an uncle who didn’t want the young man hanging around arranged an apprenticeship at a local pharmacist. This turned out to be a godsend for Berzelius. An Italian glassblower, Jusua Vaccano, gave him lessons and in doing so completely transformed his approach to chemistry.

Returning to the university, Berzelius wrote a thesis describing his mostly unsuccessful application of galvanism (electricity) in the treatment of a variety of chronic ailments. He now lived in a house owned by the mine-owner Wilhelm Hisinger who didn’t mind him doing experiments on the premises. Together, they electrolysed a wide range of salts, both molten and in solution, publishing an initial paper in 1803. Although Humphry Davy was doing parallel (and spectacular) work in London, Berzelius would develop an important ‘dualistic’ theory linking charges, salts, acids and bases.

Berzelius worked manically across all areas of chemistry. He was partnered in the lab by his housekeeper Anna Sundström who also supervised his students. She remained in post until Berzelius married in 1836. Berzelius cranked out publications – introducing letter symbols for the elements and the modern reaction equation – and a new textbook of chemistry. It was a work of huge ambition. His text aimed to codify chemistry at many levels – theoretical, observational and practical.

We take for granted many words he coined, among them isomer, catalyst and polymer

The book would be widely translated and run to many editions. By 1830 the text had grown to eight volumes, the last being a mini encyclopaedia of chemical terms and apparatus, with a dozen pull-out illustrations tucked in at the end. There are flasks and ‘burettes’, pumps and analytical apparatus, with detailed descriptions of how to use them. There is no sign, however, of what is often referred to in modern glassware catalogues as the Berzelius beaker. This term only appears after 1850, and the name may have been invented by chemist and chemical equipment merchant John Joseph Griffin who wanted to distinguish the older narrow beaker from his own broader wider version. Both designs coexist today.

Berzelius’ prolific output continued right up until his death in 1848. By this time the language and practice of chemistry had been radically transformed, and we take for granted many words he coined, among them isomer, catalyst and polymer.

When I phoned my elderly friend to thank her for her present, I could hear her beaming with delight. ‘I had to give it to you because of the memories.’ What did she mean? ‘Don’t you remember what your mother called you when you were little?’ My mother had always called me ‘Zilini’, shortening a longer term of affection, ‘Berzellini’. Suddenly, it clicked: could I be a rare example of nick-nominative determinism?