Cards on the table

Did the International Year of the Periodic Table have its expected impact?

As the International Year of the Periodic Table (IYPT) got underway at the start of this year, our comment pages hosted a debate over whether the planned events would have an impact outside of the chemistry community. One year on, we asked Roger Highfield and Martyn Poliakoff if anything has changed their minds. We invite readers to share their opinions through our letters page by contacting us at chemistryworld@rsc.org 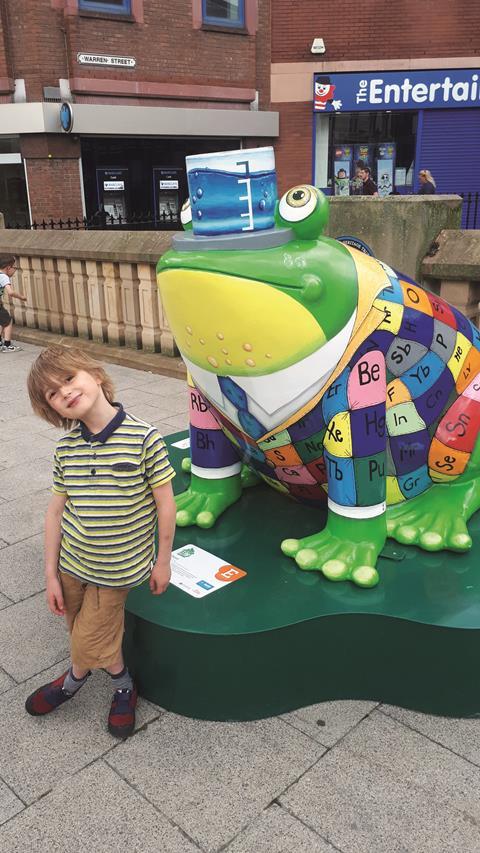 Chemit the frog and friend, proudly publicising the periodic table

The International Year of the Periodic Table has drawn to a close. Did the 150th anniversary start a wider conversation about the central importance of chemistry? Did the ballyhoo spur mass adoration of this, the central science?

We’ve seen the largest periodic table – thank you Wayne State’s Chemistry Club! At the Science Museum, spurred on by our board of trustees chairperson, Mary Archer, we’ve staged events for thousands of people, along with a display that’s potentially been seen by millions. There have been the inevitable outbreaks of alchemical art too, from daubings with ‘diaper ointment’ to murals and macramé.

While I believe the anniversary was worth celebrating, I ruffled a few p-orbitals when I expressed scepticism that this global ripple of activity would build into a tsunami of popular interest.

In a bruising riposte, Martyn Poliakoff condemned me as ‘spectacularly wrong’.

For anyone with a soft spot for chemistry, the IYPT was undoubtedly a Very Good Thing. But how you judge the success of the anniversary hoopla depends on what you mean by public engagement.

I meant more than concocting chemical capers that might ignite a flicker of interest in any passing ‘public’, as in ‘anyone around who’s not a chemist’. The ingenuity and extent of efforts to celebrate Mendeleev’s feat of elemental accountancy are plain to all. But many of the attempts to place the periodic table in front of the public have been more elementary than elemental efforts to engage: they remind me of the caricature of the Briton abroad who thinks that if they speak English slowly and loudly, preferably through a megaphone, they can engage more effectively. That gets attention, yes, but does not always foster dialogue.

I wanted to see a conversation about chemistry, ideally with the 57% of the world’s population who don’t think they know much – if anything – about science, the kinds of audiences targeted by the global multi-billion advertising and marketing industry that successfully engages with millions of people every day. To start a meaningful conversation with this multitude, who can get along just fine not knowing that carbon is in group 14, the key is to take more time to speak their language and follow their customs and practices.

Did the celebrations have an enduring impact beyond the chemically converted? I doubt it. Despite Martyn’s gallant efforts, I have yet to overhear someone in the pub excitedly discussing Dmitri Mendeleev, let alone in the bus queue or at the checkout of my local supermarket.

The predictions were made. The experiment has been done. So who was right? Did the IYPT have all the excitement of celebrating a tax return?

Sadly I’ve failed to get a comment from HMRC but, even without that, it’s clear that the IYPT has caught the public imagination really widely – not only with the expected commemorative stamps in Spain, Portugal, Moldova, and elsewhere but also by engaging with the ‘real’ public. For example, a huge periodic table of food parcels for the needy, constructed by pupils at St George’s School in Barcelona, or a feature in the August in-flight magazine of the upmarket Russian airline S7, and the IYPT-inspired ‘Chemit’ in a shopping centre on the Stockport Frog Trail, sponsored by BASF. Even Roger’s own museum eventually got in on the act.

While these activities could be accused of attracting attention rather than creating conversation, the IYPT has also engaged with policymakers and the next generation of scientists. The EuChemS periodic table showing the abundance of the elements has had real impact, raising awareness of potential shortages of critical elements. Indeed, a member of the UK House of Lords told me how that table has made him realise the urgency of conserving valuable elements.

Most striking, perhaps, is the fact that the committee organising the IYPT celebrations in Russia has been chaired by the Prime Minister, Dmitri Medvedev, himself. Young people all over the world have embraced the IYPT and I have met a heart-warming number of them, some hearing about chemistry for the first time.

We should also not ignore that the IYPT coincided with the centenary celebrations of the birth of Primo Levi, the poet of chemistry, who championed the Periodic Table and, most topically for the present times, chronicled the evils of unbridled nationalism. His work is widely known to young Italians but deserves much wider celebration. In June, I gave an IYPT lecture in Gargnano, Italy, jointly celebrating Mendeleev and Levi, where Levi’s role in challenging nationalism clearly resonated with the very international audience.

The success of the IYPT has clearly been catalysed by the instantly recognisable shape of the periodic table together with the iconic image of Mendeleev, one of the first scientific superstars. Of course we need to do much more, but the IYPT has given us a great start and, hopefully when the bicentenary comes in 2069, people will look back at the IYPT as a turning point in the public perception of chemistry.