Chemistry is often compared to cookery, and the pages of a typical cookbook read like the pages of the wonderful compendia Organic- and Inorganic Syntheses

Chemistry is often compared to cookery, and the pages of a typical cookbook read like the pages of the wonderful compendia Organic- and Inorganic Syntheses. Each provides the recipe for the preparation of something tantalising, requiring analogous techniques (simmer/reflux; filter/sieve; extract/deglaze) and with quantities expressed in a bewildering variety of units. 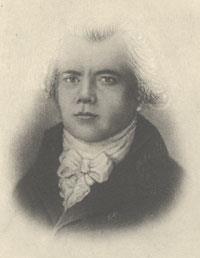 Finnish chemist, 1760-1852. Developer of the counter-current condenser, often called a ’Liebig’ condenser owing to its popularity in the German chemist’s lab. He also discovered yttrium and began the study of the rare earth elements.

The historical connections between food and chemistry go back far beyond the recent vogue for describing chefs as modern alchemists. Back in 1654, Nicolas de Bonnefons, in his Delices de la Campagne, rebelling against murky sauces that concealed fresh flavours, cried out for ’cabbage soup that tastes of cabbage’ and so on. So began the quest for pure flavour that continues to this day. By 1749, Menon in his La science du maître d'hôtel cuisinier considered alchemy to be the best model for chefs to follow. ’Chemistry,’ he wrote, 'neutralises the coarse parts of food, and strips the particles of the terrestrial juices they contain. It perfects them, purifies them, and in a fashion, spiritualises them.’ Recipes would henceforth follow an alchemical path. First the ’black work’, browning at high heat. 'To be truly tasty, flesh must be mortified.’ Then came liquefaction - the extraction of juices which would flow out to generate the precious coulis. Finally came the 'white work’, where the dish would pass into the oven, the parallel of the alchemical athanor where, over hours, the earthly humours would slowly be sublimed into ethereal vapours.

In 1825, the gastronome Brillat-Savarin waxed lyrical about osmazome, the mysterious essence of meat, identified by Thénard. But the real problem for chemists, as well as chefs, was how to handle the vapours, especially as chemistry shifted from water to non-aqueous solvents. And nowhere more so than in the distillation of alcohol. It is debatable who got to it first, but by the early 17th century Glauber was passing the output gases from a retort through a worm - a copper coil - inside a water-filled barrel.

In the second half of the 18th century several pamphlets appeared describing distillations cooled by flowing water. In 1771, Christian von Weigel described a pair of concentric tin-plate tubes soldered together and attached to a still, between which water could be passed with a funnel. The tubes corroded quickly, so he later reported a version with a glass inner tube. His work was picked up by Johan Gadolin, a professor of physics and astronomy at Åbo University, in Sweden’s Finnish territories, who suggested a variant with a square cross-section that could be taken apart for cleaning. 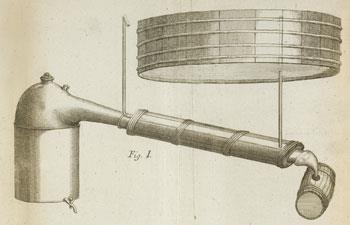 It was Gadolin’s son, also named Johan, who would develop the condenser. Born in 1760, he was assigned a tutor at age 5, with whom he spent up to 10 hours a day memorising Euclid and Archimedes. At 14 he entered the University to study maths. It gave him vertigo, so he switched to chemistry under Pehr Gadd. After five years he moved to Uppsala to Torbern Bergman’s lab, then a leading teacher and analyst, and mentor to Carl Wilhelm Scheele, the discoverer of oxygen and chlorine. Gadolin and Scheele would become lifelong friends.

Graduating from Uppsala, Gadolin returned to Åbo and worked unpaid as an acting professor. Frustrated, he went on the Grand Tour, stopping in England to work with Richard Kirwan and Adair Crawford on combustion. When he returned to Åbo, he became successor-in-waiting to his mentor Gadd, but would not become professor until a year after the latter’s death in 1797. While he waited, he wrestled with the problem of heat and questions of inorganic chemistry.

In 1791 his interests in heat, and in brandy, led him back to his father’s condenser. He redesigned the retort, widening the opening and building a wooden condenser round the beak. Importantly, he argued that the water be run uphill - the counter-current principle. With tap water years in the future, a barrel stowed at the top of a cupboard provided the cold water. The method was extremely effective and soon spread across Europe. Liebig used it in Germany, where his many students, oblivious to the Finn, associated it instead with their mentor.

Gadolin’s career continued quietly in Åbo, writing books, and corresponding with friends across Europe in seven languages. When, in 1792, he was given a strange black mineral from Ytterby, Gadolin’s analysis suggested the presence of a new element. This began the tortured story of the rare earth elements, but it would not be until 30 years after his death that gadolinium would be named after him.

The ’great work’ of the alchemists may not have brought us to eternal life, but in countless ways we - cooks or chemists - owe them a debt. One could do worse than to follow their steps to the perfect meal. And perhaps a splash of counter-current distilled spirit might lift the feast to a sublime level.