The pharma industry is increasingly ’repurposing’ drugs and drug candidates: taking known compounds and trying to find other uses for them that no one had considered. A recent study by Thomson Reuters found that the number of repurposed drugs grew from 80 to over 220 during the last 10 years. And this reveals several of our weaknesses (and perhaps a few of our strengths). 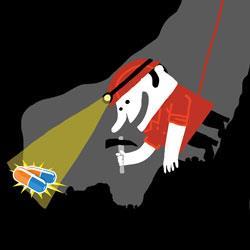 It’s helpful to think of drug discovery and development in terms of the chemical concept of ’rate-limiting steps’. That is, what are the most serious bottlenecks that keep a drug candidate from getting to the market? Even before considering safety and efficacy, at the pre-clinical stage, you know that most compounds are just not going to be suitable as medication. ADME (absorption, distribution, metabolism and excretion) factors see to that. I don’t suppose that anyone’s ever just dosed a thousand random compounds from a screening collection into rats before. (And if someone has, I wonder what ever became of him or her?) But the majority of those compounds would either not reach sufficient blood levels or have too short a half-life once absorbed to ever be considered for drugs no matter what their possible use. Good behaviour in a living animal is not a common chemical property.

Then there’s that minor consideration, toxicity, which still derails drug candidates after they’re deep into clinical trials. Despite great efforts, whole animal (and whole human) toxicity is still very much a black box problem - you never really know what’s going to happen until you take a long, serious and expensive look. But if you repurpose a compound that’s already been through development for some other condition, you’re selecting one that’s already made it over that fence, and already had that effort and expense built into it.

Now, this is not to suggest that repurposing is an easy road to riches. Getting the dosing and safety worries out of the way is a big step, but the last one now becomes even more worrisome than usual. You still have efficacy to deal with. That, of course, also derails a lot of drug candidates on their first pass through the clinic, simply because we don’t understand enough about the biology of disease. In the end, the only real way to find out if a small molecule against some target will show efficacy is to find yourself such a small molecule, spend your money and cross your fingers as it goes into humans. (An appealing business model, isn’t it? No wonder people are lining up to get into this game!)

And for a repurposing effort, there are three main possibilities. Perhaps a compound that is actually a working drug against some target has yet another activity that no one’s appreciated, even though people have been taking it for years. An example of this is the use of aspirin as preventative cardiovascular medication. Alternatively, a compound that failed through some toxicity or dissociation defect could actually overcome those in a new patient population. The most dramatic instance of that is the reuse of thalidomide as an oncology drug. Finally, you could bet that an entire mechanism or target that failed the first time has some other useful purpose that no one has realised. That was seen with sildenafil for treating erectile dysfunction (rather than its original purpose, treating hypertension, which never worked out).

But while all of these routes are possible, none of them are particularly likely. The growing popularity of repurposing tells you that discovering a completely new drug is even less likely still. You could make the analogy with some of the mining and metal industries. After going to all the trouble of turning iron ore into steel, it’s actually much more economical to reuse it rather than go searching for another accessible ore deposit, of which there are not as many these days. Perhaps we’ve ’mined out’ some of our more accessible therapeutic space, and need to find more uses for what we’ve extracted.