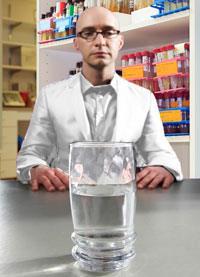 The tedious prospect of water solubility

It’s hard to remember, but before about 20 years ago, the common wisdom in the pharmaceutical industry was that kinase enzymes might be ’undruggable’. People were working on them, true - but they were worried people. The chemical starting points weren’t very appealing, and no one held out much hope for getting selective inhibitors. Comparing the number of kinases to the number of protein residues that were known to be phosphorylated by them, it was clear that these enzymes were very busy and wide ranging. How could you inhibit them without bringing down all sorts of unintended consequences?

But times change, and we change with them: these days kinase inhibitors are everywhere. The toxic side effects (for once) turned out to be less fearsome than expected. Dozens of structural motifs are known to serve as templates for drug discovery in the area, with selectivities ranging from single-enzyme-only to everything-in-their-path. Sorting out all the clinical implications of these is now the rate-limiting step - one which looks to occupy us for many years to come.

So, let’s think like the head of a drug research organisation: if that field is too well-ploughed, why not work phosphorylation from the other end and look at phosphatase enzymes instead? If one class of phosphate-wrangling enzymes has turned into its own industry, perhaps another one can. And there are intriguing targets to be had - protein tyrosine phosphatase 1B (PTP1B), for example, which is right in the middle of the insulin and leptin signalling pathways. Mice with that enzyme knocked out appear normal, but have improved blood glucose and lipid levels. Even more strikingly, they hardly gain weight no matter what sort of awful high-fat diet you put them on. An opportunity waiting to be seized?

Well no, apparently. Years of work have failed to deliver a good PTP1B inhibitor. People are still trying, but every major drug discovery organisation in the world has taken a beating, some of them more than once. These days, the word undruggable follows such proposals around like a bodyguard, stiff-arming potential fans and glaring at anyone who tries to make eye contact. What’s the problem?

The biggest one is probably the binding site that a drug would have to target. Kinases are transferring phosphates onto proteins, but a phosphatase has to recognise one that’s already in place. And that means a very polar binding pocket, lined with positive charges - a poor fit with most compound screening libraries. Medicinal chemists tend to avoid highly charged molecules, in the (usually well justified) belief that they perform poorly in oral absorption, cell penetration and metabolic clearance. There’s not much point in dosing a compound that never makes it from the gut out into the bloodstream. Even if they do, they tend either to come sluicing out immediately through the kidneys, or stick so tightly to plasma proteins that they ride around for weeks. Neither of these is much fun for a drug development organisation.

There’s an even earlier problem with such compounds. They’re more difficult to make and purify through the usual sorts of organic chemistry techniques. Our colleagues lodge all sorts of complaints with us about insoluble drug candidates, but here’s one of the shameful secrets of medicinal chemistry: we don’t actually care for compounds that are too water-soluble. They take us into a tedious (and often unfamiliar) world of lyophilisers and ion-exchange columns. Throwing away the organic layer during an extraction can feel unnatural; most bench chemists would far prefer something that dissolves in good old ethyl acetate.

We’d be willing to work in water, though, if only the drug candidates were there at the end of it. But the other big factor holding back phosphatase inhibitors is that there are far fewer enzymes in that class than there are kinases. They’re clearly being worked rather hard, which means that all those fears about selectivity and toxicity that hovered over kinase projects could still apply to phosphatases, and they’re going to be much harder to dispel. There are clearly some phosphatases that you would not want to disturb. One called PTEN, for example, is a very common tumour suppressor protein. It’s one of the first things lost when many cancer cell lines cross over to the dark side, so inhibiting it with a drug candidate would almost certainly be a bad idea.

So here then, is an example of what happens to many seemingly good ideas in drug discovery. They turn out to be much trickier than they appeared on first inspection. We may yet see phosphatase inhibitors make it to market, but here’s a prediction: if they do, their most likely therapeutic area by far is the one that has the most tolerance for side effects and the most desperate patient population: oncology. That’s where the kinase inhibitors first showed up, and it’s probably the best fit for the other side of protein phosphorylation, too.