When Francis Crick, James Watson and Maurice Wilkins were awarded the Nobel prize in 1962, the Sunday Times  said that ’their work heralds the day when man may be able to create simple forms of life himself at will, in a test tube.’

The genealogy of that bold claim, and its status today, warrants an article in itself. But I’m struck by the seemingly innocuous part of the remark: that the test tube will be the receptacle for this synthetic life. Probably no one imagined that life-creating chemists would necessarily use an actual test tube; the term supplies a kind of emblematic shorthand for chemical synthesis in general. To produce something in the ’test tube’ is to produce it by artificial chemical means: the test tube in this sense represents the entire chemical enterprise.

This is a 20th century phenomenon. In previous times, it was not the test tube but other items of alchemical apparatus, especially the alembic, which defined the chemical art. The Canon’s Yeoman in Chaucer’s Canterbury Tales  lists the equipment of his former master, an alchemist, as ’crucibles, pots for sublimative action, phial, alembic, beaker, gourd-retort’ - adding dismissively, ’and other useless nonsense of this sort’. And illustrations of laboratory vessels from the transitional era of ’chymistry’, for example in Andreas Libavius’s seminal Alchymia  (1597/1606), have not a test tube in sight. He shows ranks of round-bottomed flasks, retorts and oddly shaped ’pelicans’ and cucurbits, but no test tubes. There was no symbol for a test tube among the cryptic representations of apparatus often used by alchemists. 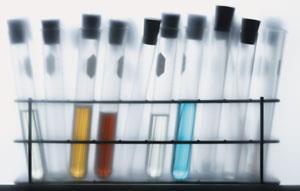 Tradition has it that the test tube was invented by Michael Faraday, perhaps as a convenient replacement for the wine glasses commonly used as vessels by earlier chemists. And it is true that descriptions and depictions of test tubes abound in his correspondence: he sketches one, for example, in a letter to the German-Swiss chemist Christian Friedrich Sch?nbein in 1854. But other researchers were using test tubes by then too, whether or not at Faraday’s instigation: George Gabriel Stokes mentions and draws one in a letter to Faraday in 1852.

Yet there is nothing in Faraday’s works, nor in those of later 19th-century chemists, which hints at the iconic role test tubes would acquire. Indeed, chemistry has ever since the days of alchemy often been distinguished by such elaborate and even beautiful glassware that it seems odd that this humble tube, sealed at one end, should have taken on such significance. The test tube seems now to represent a kind of hermetically sealed world, removed from our own and yet marvellously visible from it, within which strange transformations occur that seem to both mimic and mutate nature. 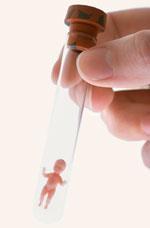 This was already the role assigned to the alembic or retort, in which alchemical images depicted the characters that symbolised chemical substances: the red king and white queen, the serpent, black crow, white dove and so forth. The inside of these vessels comprised its own microcosm. That is what the image of the test tube unconsciously now conveys. This is precisely the implication of the cover of my 2005 book published by the Royal Society of Chemistry, Elegant Solutions, which shows a plant sprouting from soil (an allusion to Jan van Helmont’s famous ’willow tree’ experiment) while floating on the meniscus of a liquid in a test tube.

But the most familiar facet of the test tube’s iconography today is its association with in vitro fertilisation (IVF), in the form of the ’test tube baby’. The IVF procedure uses Petri dishes, not test tubes - but somehow the ’Petri dish baby’ did not have the same resonance. Linking IVF with the test tube implied that it was a wholly ’artificial’ process akin to the chemical creation of life itself, with the corollary that the ’baby’ was not quite a real human being but a synthetic creature like the alchemical kings and queens.

These associations were clearly evident when the first ’test tube baby’, Louise Brown, was born in 1978. Her father John Brown said that ’when they say "test tube baby", everybody had the impression that she was going to be nine feet tall and a quarter of an inch wide. You know, something kind of out of a comic strip.’ And the symbolic link between the test tube and chemistry appeared to suggest that Louise Brown had been assembled from a soup of chemical reagents ordered from Dupont.

This imagery conditioned the way IVF was regarded as something like the chemical reaction of life apparently promised by the work of Crick and Watson. The next time you reach for a test tube, you might bear in mind the weighty allegorical power of this deceptively simple piece of kit.