As thermodynamics tells us, all disequilibrium represents an opportunity. Any system not in its equilibrium state can be harnessed to do work, and the history of civilisation could be told through its attempts to capitalise on that. Most crudely, we have exploited chemical disequilibrium by burning fuel: first to cook and keep warm, later to smelt metals, make steam, send rockets to the moon. But we all know now about the problems associated with that, which is why so much interest now attaches to other types of disequilibrium.

Naval strength once depended on imbalances in atmospheric pressure, which now rotate giant wind turbines. We struggle to exploit the sloshing of the seas, the nuclear disequilibrium of the sun, even the subtle thermal gradients of the deep earth. The irony - a cruel joke of thermodynamics, perhaps - is that those disequilibria that offer the ’cleanest’ work tend to be also the most dispersed.

But there’s one little-publicised pocket of disequilibrium that deserves more attention. All around the world, fresh water flows across the land and into the briny sea. Spanning the boundary zone between fresh and salt water is a salinity gradient: a physicochemical reservoir of osmotic pressure, itself a product of the entropy of mixing. Why not use this pressure to do work? 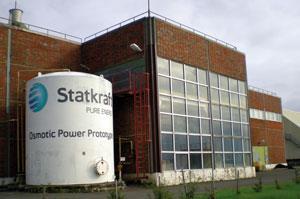 Osmotic power being tested in Norway

That’s what Israeli chemical engineer Sidney Loeb asked in the 1970s. Loeb had already pioneered reverse osmosis for desalination in the 1950s, devising the robust semi-permeable membranes that made it practical. In reverse osmosis, water is driven under pressure across a salt-obstructing membrane. Loeb simply reversed the logic. In a process known as pressure-retarded osmosis, he imagined harnessing the pressure that osmotic flow produces as sea water draws fresh water through the membrane. The pressure rise on the seawater side of the membrane can force water through a turbine, creating electricity.

Compared even with wind or hydroelectric power, ’osmotic power’ is still a tiny affair. But it is starting to catch on. The Norwegian company Statkraft has built a prototype generator at Buskerud in Norway, which should produce a power output of 2-4kW. Statkraft hopes to have a full-sized commercial generator by 2015, and the company says that osmotic power has the potential to generate around 10 per cent of Norway’s energy needs, and 1600TWh of energy globally.

Salinity gradients can be converted directly to electricity using two selectively permeable membranes, one that admits positive ions and the other negative ions. A layer of salt water sandwiched between fresh water and separated by the membranes will lose the two kinds of ion in opposite directions, creating a potential difference that can be used to drive a current. This is called reverse electrodialysis, and it deploys stacks of alternating fresh/saline layers to boost the voltage generated. The Netherlands-based energy consulting company KEMA is developing this technology in a project called Blue Energy.

Now there’s a new option. Doriano Brogioli of the University of Milan, Italy, has devised a form of capacitor that builds up electrostatic energy when it comes into contact with fresh water.1  Brogioli has adapted an existing technology, electrical double-layer (EDL) capacitors. Like ordinary capacitors, these store energy in the form of separated electrical charges on two parallel plates, but with a much higher energy density. The charge separation is primarily in a salt-saturated layer of activated carbon on the electrode surfaces, where counterions accumulate (the electrical double layer) in response to electrode charging. Brogioli exploits the fact that, when an EDL capacitor immersed in sea water is brought into contact with fresh water, osmotic flow carries the salt ions in the double layers away from the electrodes. This charge separation increases the electrostatic energy, boosting the voltage between the electrodes - and the extra energy can be captured as electricity. That is done in a cyclic manner, with the capacitive cell being alternately infused with sea water and flushed with fresh water. Like pressure-retarded osmosis, this process is the reverse of a desalination method.

Brogioli has made a lab prototype of his device, and he estimates that using state-of-the-art EDL capacitor materials it should be possible to extract 1.6kJ of energy per litre of fresh water. With a cycle rate of 1 per second, this should generate a power output comparable to that of existing membrane-based methods. The need for a fill-flush cycle driven by pumps is a drawback, but all the same this looks like a worthy competitor. With luck and good engineering, every major estuary might one day have its own blue power plant.