Did you hear about the McDonald’s ’Shrekgate’ fiasco? Colourful characters from the Shrek movies adorned drinking glasses being sold in the burger chain’s US branches, but sadly the images had been painted with cadmium pigments. Over $1 billion was wiped from McDonald’s share value, and 12 million glasses had to be recalled. You might have thought that a food chain famed for enticing youngsters with a range of foods some consider toxic would have taken more care to avoid putting genuine toxic substances into these pictures of Shrek, Princess Fiona, Puss in Boots and Donkey.

But the other casualty is clarity in how to think about the dangers of cadmium, or about regulation of toxic compounds generally. It’s clear that a significant intake of cadmium does no one any good: the notoriety of this heavy metal is warranted. Cadmium causes medical problems by masquerading as the essential element zinc, and once in the body it is hard to get out. It accumulates particularly in the kidneys, and can lead to kidney failure and weakening of bones and joints. Fumes of volatile cadmium compounds are the worst: a construction worker on the Severn Bridge between England and Wales died in 1966, and several others were hospitalised, after breathing in cadmium that coated bolts that workers had been melting with a blow torch in a confined space.

But toxicity doesn’t interest the media as much as carcinogenicity. Several reports on the McDonald’s affair stated baldly that cadmium is a ’known carcinogen’, omitting to mention that this is firmly established only for some animals, not humans. That cadmium causes cancer in rats is a very good cause for concern about exposure, but it cannot help to imply that a substance is only truly wicked once it has been labelled a carcinogen.

There was also an absence of discussion of exposure thresholds. A spokesperson for McDonald’s insisted that ’the Shrek glassware is safe for consumer use’ and that it was being withdrawn only ’out of an abundance of caution.’ It is not to deny the foolishness of the initiative from a public relations perspective to say that the company was probably right here. We all ingest some cadmium in our food, and the World Health Organization stipulates that a daily intake of less than 70 m g - about three times the average intake - is safe. No one has mentioned, or even asked, what intake levels might be expected from the Shrek glasses.

This daily dose of cadmium comes largely from plants that tend to accumulate it from the trace amounts in soil. Spinach and cabbage have this propensity, and so does rice: a high incidence of cadmium poisoning in a region of Japan in the mid-20th century was due to accumulation in rice exposed to the effluent of zinc mining.

Why use cadmium in paints at all, if it is harmful? After all, lead pigments are (mostly) a thing of the past for that reason, and indeed the current preferred white for fine art, zinc white, was devised explicitly (by the eminent French chemist Bernard Guyton de Morveau) as a replacement for lead white after the hazards of mass manufacturing became apparent. Can’t we similarly dispense with cadmium red, yellow and orange? 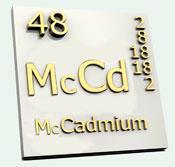 It’s not that easy. When they were discovered in the early 19th century, the cadmium colours were welcomed as being uniquely fine. The German chemist Friedrich Stromeyer observed yellow cadmium oxide produced spontaneously as a byproduct of zinc smelting in 1817, and he found that the sulfides of this new metal offered even more brilliant yellows and oranges. The impressionists were among the first artists to embrace them. And by adding some selenium in place of sulfur, the pigment darkens to red: the first opaque, bright and stable mineral red that artists had had since ancient vermilion. Matisse fell in love with it.

Now some painters live in fear that cadmium colours will one day be banished from the palette for health and safety reasons. Paint manufacturers have found ways to reduce the toxicity of cadmium colours by reducing the pigment solubility, but broader concerns about cadmium pollution - it is also used in some batteries and solar cells, for example - might still spell their doom. Some companies, such as Golden Artist Colours, have experimented with organic pigments - pyrroles for reds and oranges, Hansa (azo) pigments for yellow (some paints labelled ’cadmium’ already contain such pigments instead). But cadmium devotees say these substitutes are just not the same.

In 2000, Martin Jansen and Hans-Peter Letschert in Germany reported that a new class of inorganic pigments containing calcium, lanthanum, tantalum, nitrogen and oxygen offered rich reds and yellows.1 Jansen says that he has received continual requests for these pigments from painters and toy manufacturers, and that the high-tech chemicals company H C Starck has launched a pilot project to make them. The final product will be expensive - perhaps $1000 (?650) per kg - but only tiny amounts would be needed per item. And the recent Reach legislation on toxic substances in Europe offers a substantial boost to environmentally benign replacements. Perhaps someone should tell McDonald’s.