Philip Ball warms up the subject of snowflake structure

Philip Ball warms up the subject of snowflake structure 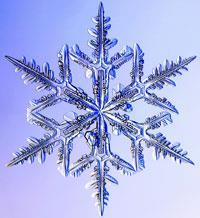 ’How full of creative genius is the air in which these are generated!’ exclaimed Henry David Thoreau on inspecting the minute forms of snowflakes. But in popular culture some of them appear to be more the creation of an overactive (or underinformed) imagination. As Thomas Koop says in a recent letter to Nature  ,1 every Christmas one finds images of stars with five, eight or even 12 points rather than the customary six.

This fact of nature was made plain enough in Johannes Kepler’s 1611 pamphlet De nive sexangula  (’On the six-pointed snowflake’). Here he tried to account for the hexagonal symmetry on the basis of the regular packing of constituent ’globules’ of ice - the first suggestion that packing of particles might underlie the geometric shapes of crystals. Kepler concluded it couldn’t suffice to answer the question - an irony, for the hexagonal symmetry of the H-bonded lattice of water molecules in ice does indeed explain the sixness.

We now know that the five- and eight-pointed snowflakes in festive designs are impossible. These symmetries are forbidden in crystal lattices on geometric grounds: one can’t stack atoms or molecules periodically with pentagonal or octagonal (or indeed dodecagonal) symmetry.

Yet in the 1980s apparently crystalline materials were discovered that show five-fold and eight-fold diffraction patterns, as well as pentagonal facets. These quasi-crystals, mostly metal alloys, lack true periodicity but contain local stacking arrangements with the corresponding ’forbidden’ symmetries.

While the hexagonal ring of water molecules is the basic motif of ordinary ice, pentagonal rings are actually more favourable, since the angles at the vertices are then much closer to the ideal ’tetrahedral’ angle of the H-bonding coordination. Indeed, five-fold rings are more common than six-fold in liquid water, and they are also present in ice clathrates.

On these grounds, one might wonder if water pentagons might in principle form a 3D tiling scheme analogous to those that can be used to describe the structure of quasi-crystals. To my surprise, it seems nothing of the sort has been explored in the literature. But snowflakes and notions of quasi-crystallinity have intersected. For example, Aloysio Janner of the University of Nijmegen, the Netherlands, has suggested that tiling schemes derived from quasi-crystals can be used to describe some morphological features of the flakes.2,3

Last year, Javier Carrasco of the Fritz Haber Institute in Berlin, Germany, and his colleagues reported linear chains of water molecules adsorbed on the surface of copper as a series of pentagons.4 Most resonantly of all, a prescient early suggestion of pseudo-five-fold tilings by crystallographer Alan Mackay appeared in a paper called De nive quinquangula: On the five-pointed snowflake  .5 (Sadly, however, Mackay did not explore the idea for water itself.)

The details of whether it would work are, however, complicated - and would comprise an enticing research project. Mackay considers the possibility very unlikely, because, he says, ’quasi-crystals arise when strong local order competes with periodicity [whereas] local ordering in water is weak’. But he thinks ’water vapour deposited at very low temperature on to a quasi-crystal surface might be ordered to fit,’ or that the quasi-orderingmight be induced by freezing water in an appropriate acoustic or electromagnetic field. Any takers?

Still the plot thickens. Koop has received a letter from Lorne Whitehead, a surface physicist at the University of British Columbia, Canada, containing a remarkable claim. ’In the winter of 1984,’ says Whitehead, ’I was visiting St Paul, Minnesota, during a moderately cold winter afternoon. I happened to glance down at the railing of the balcony I had stepped onto, and noticed that small white particles were slowly falling onto the railing. I did not have a microscope with me, but at the time I had good close-up vision, and I observed carefully, in part because I was surprised by what I saw. The particles had the shape of pentagonal prisms approximately 0.5-1mm in diameter. Naturally, I had expected these particles to be hexagonal, and so I checked and rechecked, and they were all very clearly pentagonal!’

Ken Libbrecht, an expert on snowflakes at Caltech, finds this hard to credit. ’Meteorologists have photographed ice crystals in all sorts of conditions,’ he told me. ’I would say at least several million crystals have been photographed, but to my knowledge not one clearly pentagonal plate has.’

However, not all snowflakes are six-pointed. Some have 12 points as a result of simple coalescence. Others are triangular, a fact observed for centuries but only recently explained by Libbrecht and his colleague Hannah Arnold as the consequence of impurities that cause the flake to tilt as it grows.6 Libbrecht says that cubic ice crystals, formed from an alternative ice structure called cubic ice, which has a diamond-like lattice, are also well documented. So perhaps designers of wrapping paper have a little more licence than we think.