Dimeric natural products are a common find, and represent a formidable challenge to synthetic chemists.1 As in so many scenarios, nature’s ability to unify two complex fragments with ease is both remarkable and frustrating. With dimerisations, this dichotomy is often quite pronounced, as modern synthetic techniques tend to require appropriately-partnered functional groups to unify; a typical case is the reaction of a nucleophile with an electrophile. However, when possible, a biomimetic dimerisation is not only efficient, but an elegant endgame strategy.

Yoshiharu Iwabuchi and his team at Tohoku University, Japan, were clearly undaunted by this challenge, but must have been disturbed by the conclusions drawn by Barry Snider of Brandeis University, US, who in 2007 published details of his team’s failed efforts to complete idesolide.2 Worse still, Snider’s plan for a late stage dimerisation was identical to that planned by Iwabuchi - but that didn’t stop the team from proceeding, confident that a method could be found.

Iwabuchi’s approach was to very quickly set three stereocentres by performing a diastereoselective Upjohn dihydroxylation on a racemic allylic alcohol using osmium tetroxide.3 This method gave the group a mixture of two diastereomerically-pure enantiomers, which they went on to separate by oxidative kinetic resolution (OKR). Selectively oxidising only one of the enantiomers gives a mixture of the desired enantiomerically enriched ketone and the untouched alcohol, which were easily separated (figure 1). The key to this was a sophisticated organocatalyst reagent developed by the group4 (N  -hydroxy-4-benzyl-1-butyl-2-azaadamantane) used in conjunction with a bulk oxidant, in this case the relatively mild trichloroisocyanuric acid (TCCA). The theoretical maximum yield for each product is 50 per cent - so a 36 per cent yield of the desired ketone with a 95 per cent enantiomeric excess is an excellent result. 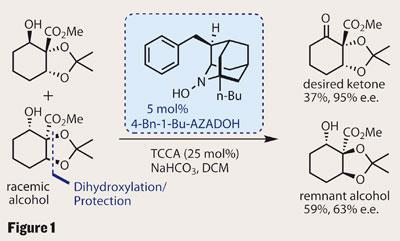 With the enantiomerically enriched material in hand, it was time to complete the monomer. The ketone was reduced to an alkene, leaving a diol that required a rather tricky oxidation. With only one of the two alcohols capable of being oxidised (the other is tertiary), one might think that just about any oxidising conditions would work. However, the group struggled and eventually succeeded with a persistent AZADO (2-azaadamantane-N-oxyl) radical and a bulk oxidant (a simpler version of their OKR conditions) (figure 2). Persistent radicals are a fairly exotic species, stabilised by steric crowding, and long-lived enough to be bottled. Personally, I’m still amazed that one can simply buy a bottle of radicals! In this case, the radical was aided and abetted by a polymer-supported variant of BAIB [(bis(acetoxy)iodobenzene)], known for its use in these situations.5 Keen oxidisers may have come across a similar system using TEMPO (2,2,6,6-tetramethylpiperidine-N  -oxyl), which is also a persistent radical. 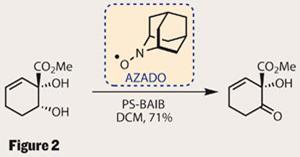 Luck be a lady

With the monomer complete in only 10 steps, the group must have felt frustrated that their target was seemingly unreachable. They tried all the usual suspects to provoke a response - acid, Lewis acid, strong and weak bases - but only managed to aromatise the ring to form methyl salicylate. However, it wouldn’t be on this page if they had failed, so I shall explain their serendipity. In one of their stock pots of monomer, they found a trace of a crystalline compound. Incredibly, analysis revealed that this ’impurity’ was idesolide, and that the monomer was also contaminated with left-over AZADO! (figure 3). A quick screen of conditions showed that increasing the quantity of AZADO gave a very respectable yield of the target; but why? Further investigations are ongoing, but the group has also had success with other additives, suggesting that the required feature is an sp3 nitrogen centre.

The group is at pains to congratulate serendipity for her success in this work, but they should also be proud of their own synthetic efforts towards the monomer, and for their dedication in assigning impurities. Who knows what’s forming the flasks at the back of my fumehood?